The Misery of German Magic by Numbers

During the first day of the World Magic Cup, a tweet caught my eye.

I immediately thought: This can surely not be a tweet of pride, right? After just five rounds, all the German team had achieved so far was reaching day 2 with (almost) absolute certainty. So this had to mean that we had failed to make day 2 in each of the preceding three years! I looked it up, and yes, that was actually the case. That is no reason for pride, but for shame.

Now, of course, Magic is a game of luck and variance, but being among the most successful 32 nations in the World Cup is still a very reasonable outcome to expect for a large and wealthy nation with a rich Magic history, and missing that goal three years in a row seems quite significant. I decided to compare Germany’s results with that of other nations, looking up 24 countries overall, including the most prestigious Magic countries in the world, the biggest nations from Europe, and our closest neighbors. This is what I found: 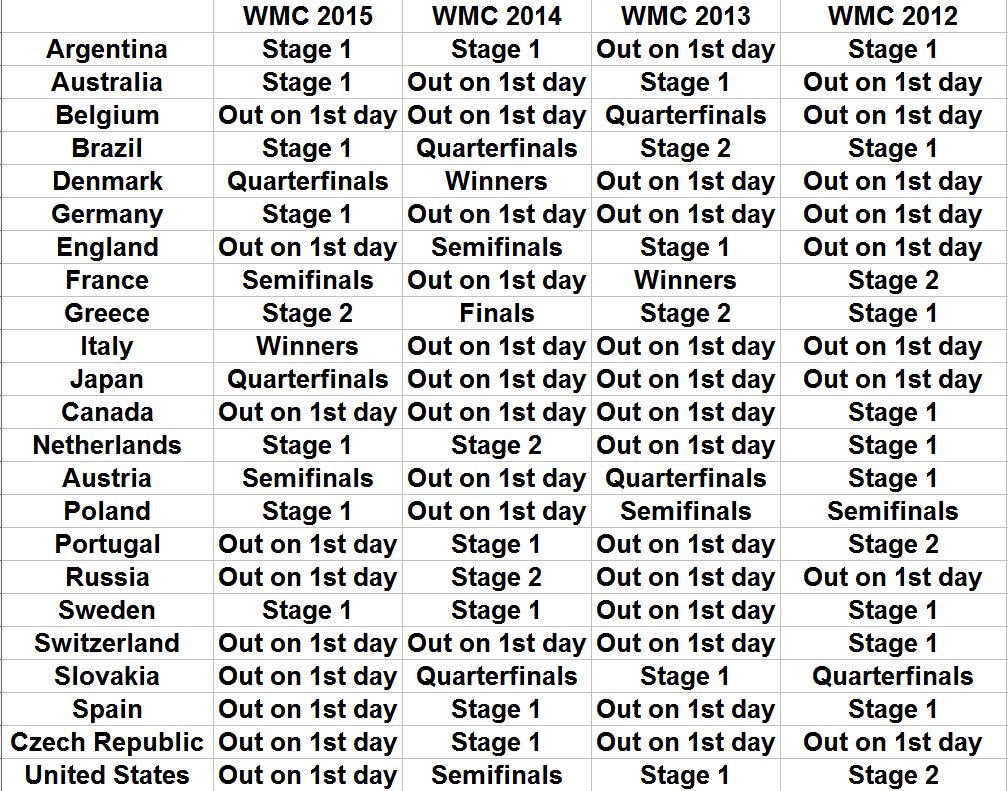 To better compare these results, I decided to give 1 point to each country for each time they reached stage 1 of group play on day two, another point for reaching stage 2, a third for being in the quarterfinals, a fourth for playing in the semis, a fifth for reaching the finals, and a sixth for taking the trophy home. Then I sorted this table by total points and got this here: 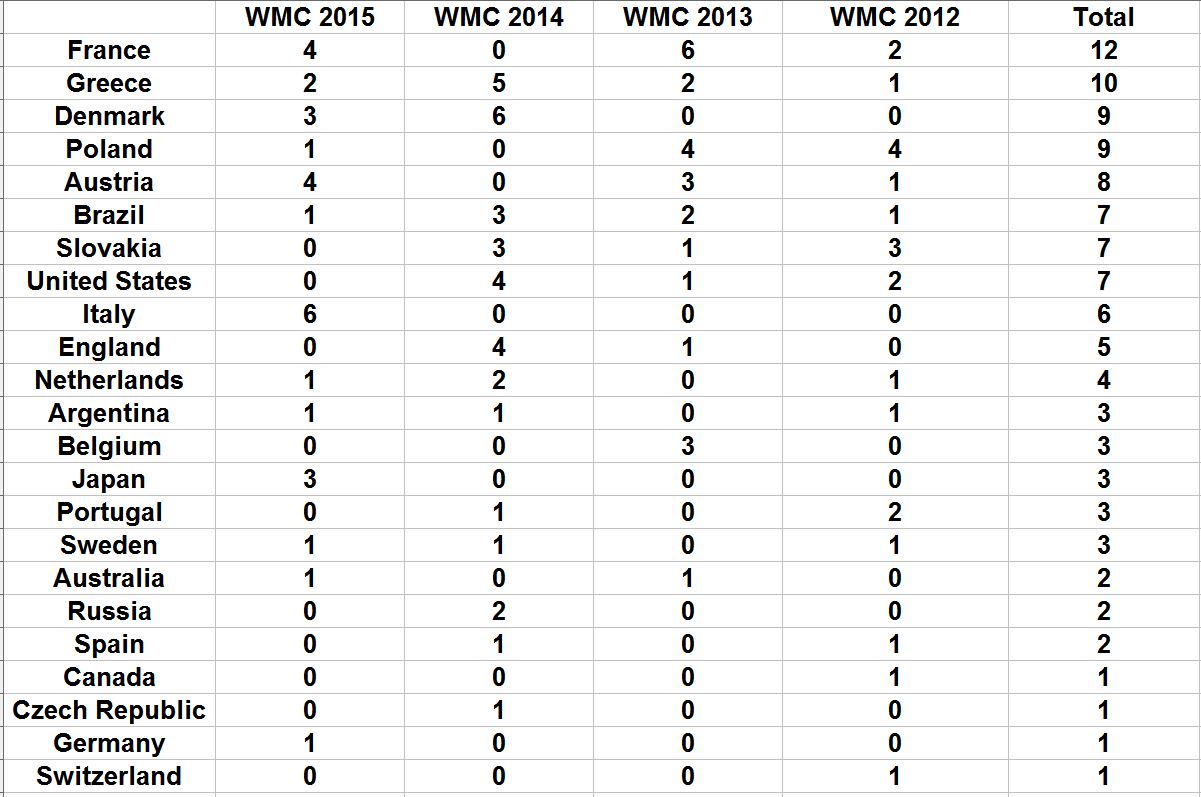 Admittedly, we’re not the only nation underperforming at the World Cup, but being at the very bottom of those rankings is still nothing short of embarassing!

But how much have we really been underperforming? Maybe we have actually gone from playing second fiddle internationally to being outright Magic backwater? (I admit I’m not that great with metaphors in English…)

To put things in perspective: There used to be a time when Germany was one of the four big Magic nations. The United States were – Kai Budde notwithstanding – clearly the overall number one for obvious reasons; Japan safely secured the number two spot after a few years; and France never quite gave up the headstart they had when cards had been printed in French before they were available in German; but noone else would oust us. We were (and, I believe, still are) one of the biggest markets for the game worldwide, and as a consequence were among the most succesful countries in competitive play (even excluding Kai). But alas, we have taken a big fall, and I decided to find out just how big that fall was. So I looked up the number of players who had secured gold and platinum status during the latest four seasons for the countries above.

Two caveats: For one thing, Wizards have consciously rigged high level play during the last few years to massively favor North American players, so it is not exactly fair to compare the rest of the world to the United States and – to a little lesser extent – Canada. Of course, density of organized play has always been a factor, but things have gotten ridiculous lately.

To produce a ranking, I gave each country 2 points for each player who achieved platinum status during a season, and 1 point for each who made gold.

The picture is clear: We count among the also-ran Magic nations nowadays, despite our large size and proud history. Of course, getting no high level events on our home turf anymore hurts, but as there are still a lot of Grand Prixs happening each year in driving distance, it’s hard to see why we should be so extremely disadvantaged compared to, for example, Sweden or Slovakia.

I still hold that the downfall of the German Magic internet community is a factor here (although causality probably goes both ways): No tournament reports, no strategy articles, no active forum appealing to competitive players anymore – and what’s worst, almost noone but me missing these things! A small circle of road warriors is still regularly hitting Grand Prixs and PPTQs, but with little reward in relation to their effort. Some even seem to have given up on the idea of own success, contenting themselves with being part of the playtest groups of succesful players from other countries, having lost any sense of belonging to a German Magic community. The desire for both disseminating and absorbing knowledge among fellow Germans is dead.

The current season is still young, but so far it really does not look as if Germany would get a gold pro again, while smaller countries like Denmark, Sweden, Austria and the Czech Republic have reasons to be optimistic. (Actually, Denmark’s Martin Muller has already secured gold during the World Cup!) But hey – it’s probably my fault in some way, right? Oh, and Germany’s Magic glory is probably not even really gone at all – it only hides in places where I can’t see it, just like its community. Or its common sense…

But enough ranting for this time. I finally finished my set of 100 Battle for Zendikar drafts with an overall disappointing tournament win ratio of 21%. These are my latest winning decks: 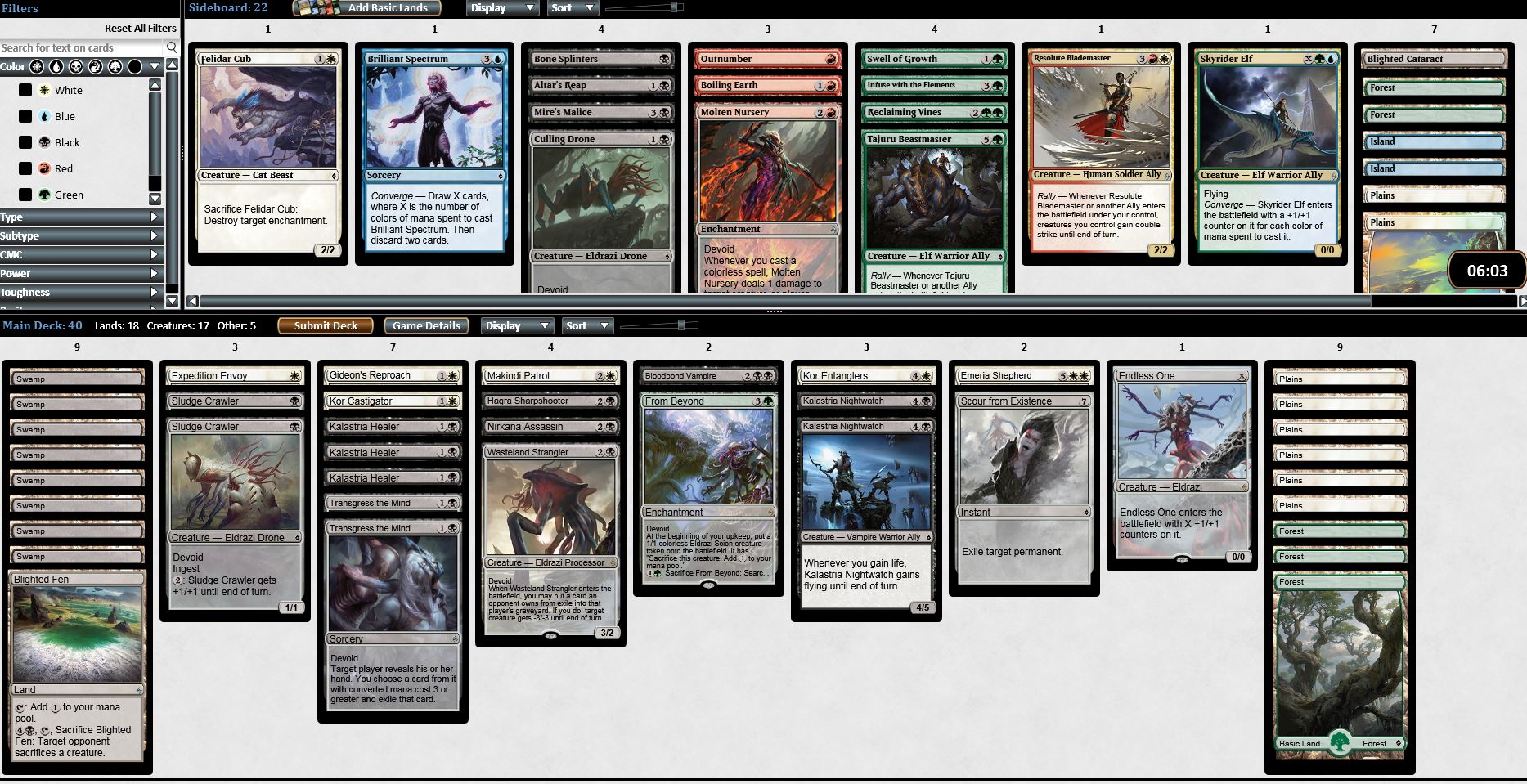 (I sided out the green splash for a red splash to run the Blademaster in two matches.) 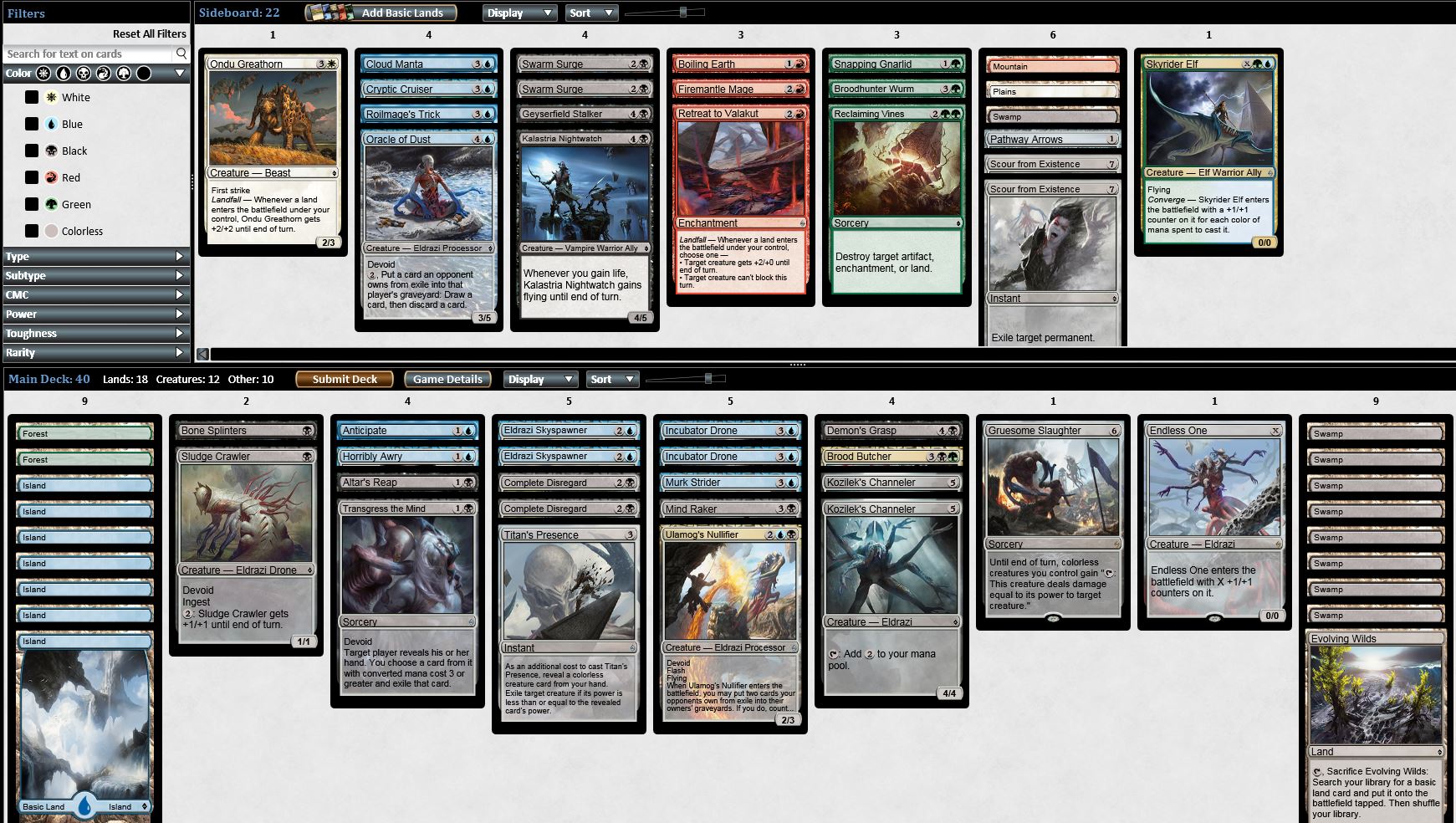 (Here I always sided out Green because I felt my deck was much more powerful anyway and would only lose to bad mana draws.) 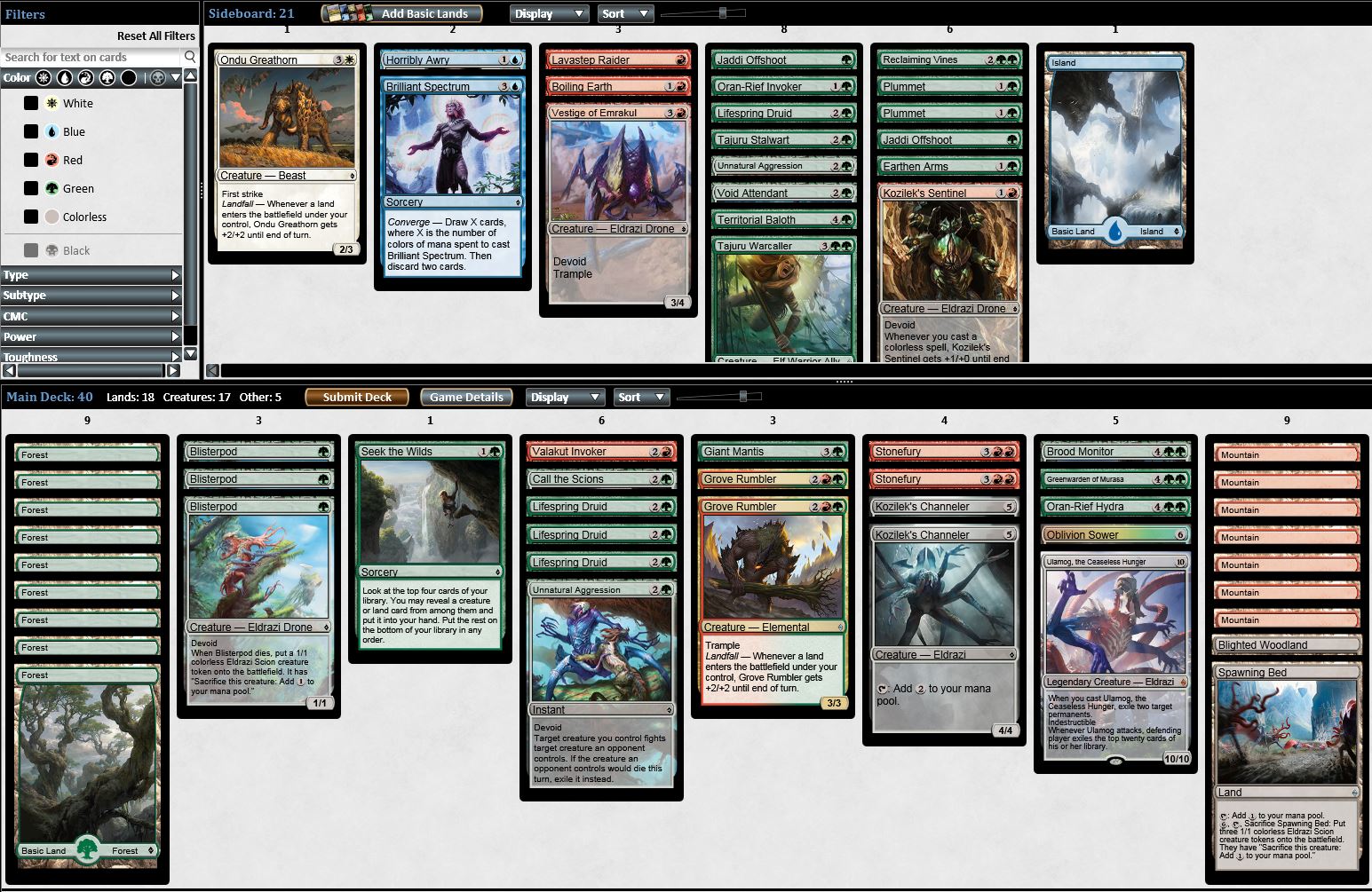 (No, the Warcaller in the sideboard isn’t a mistake. This deck didn’t want it. Note that I never played the Hydra or the Greenwarden, but Sower and Ulamog were great, and I won two close games with massive Rumbler attacks thanks to Sower or Woodland.) 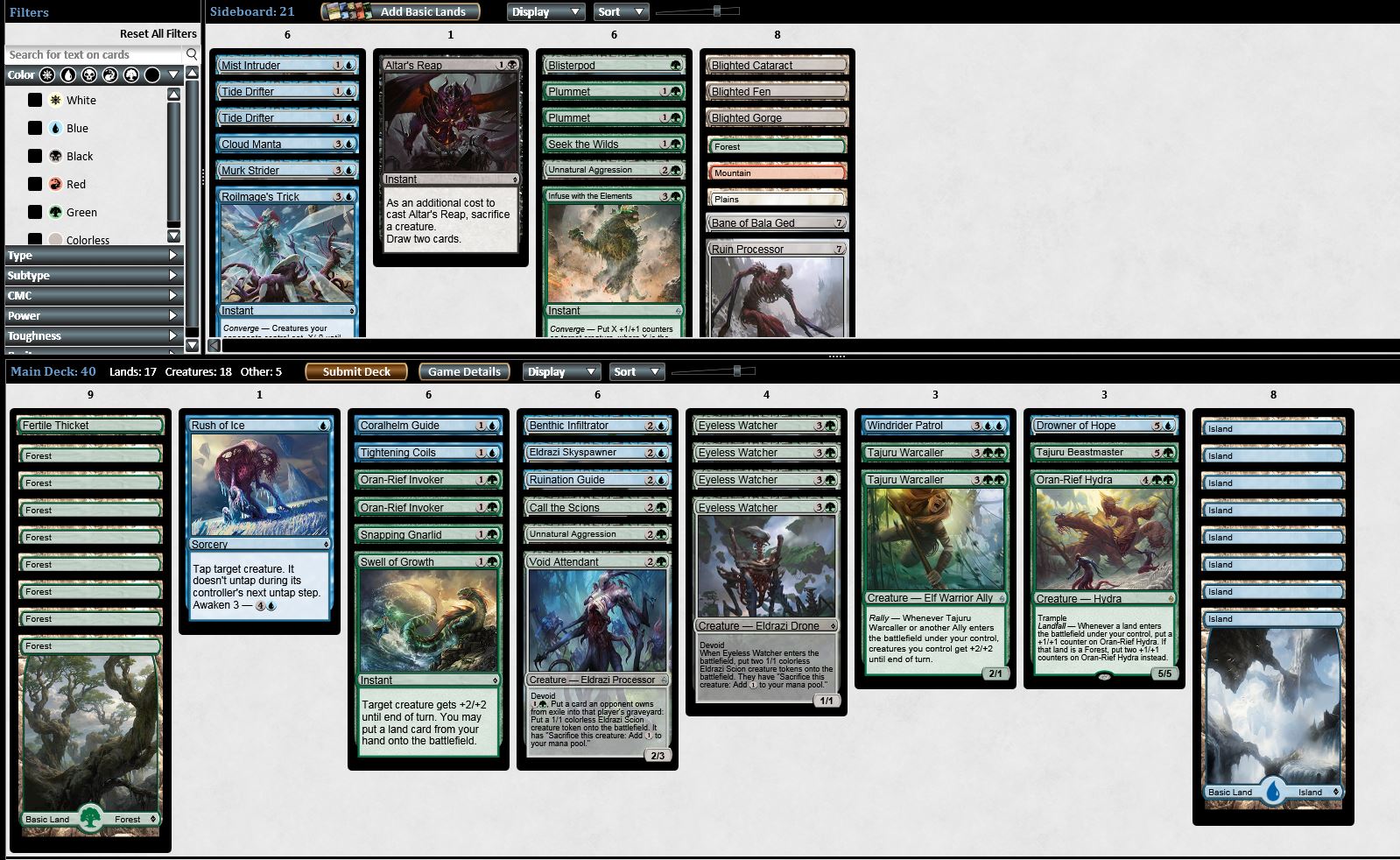 (No color combination is truly weak if you’re in the right seat for it!) 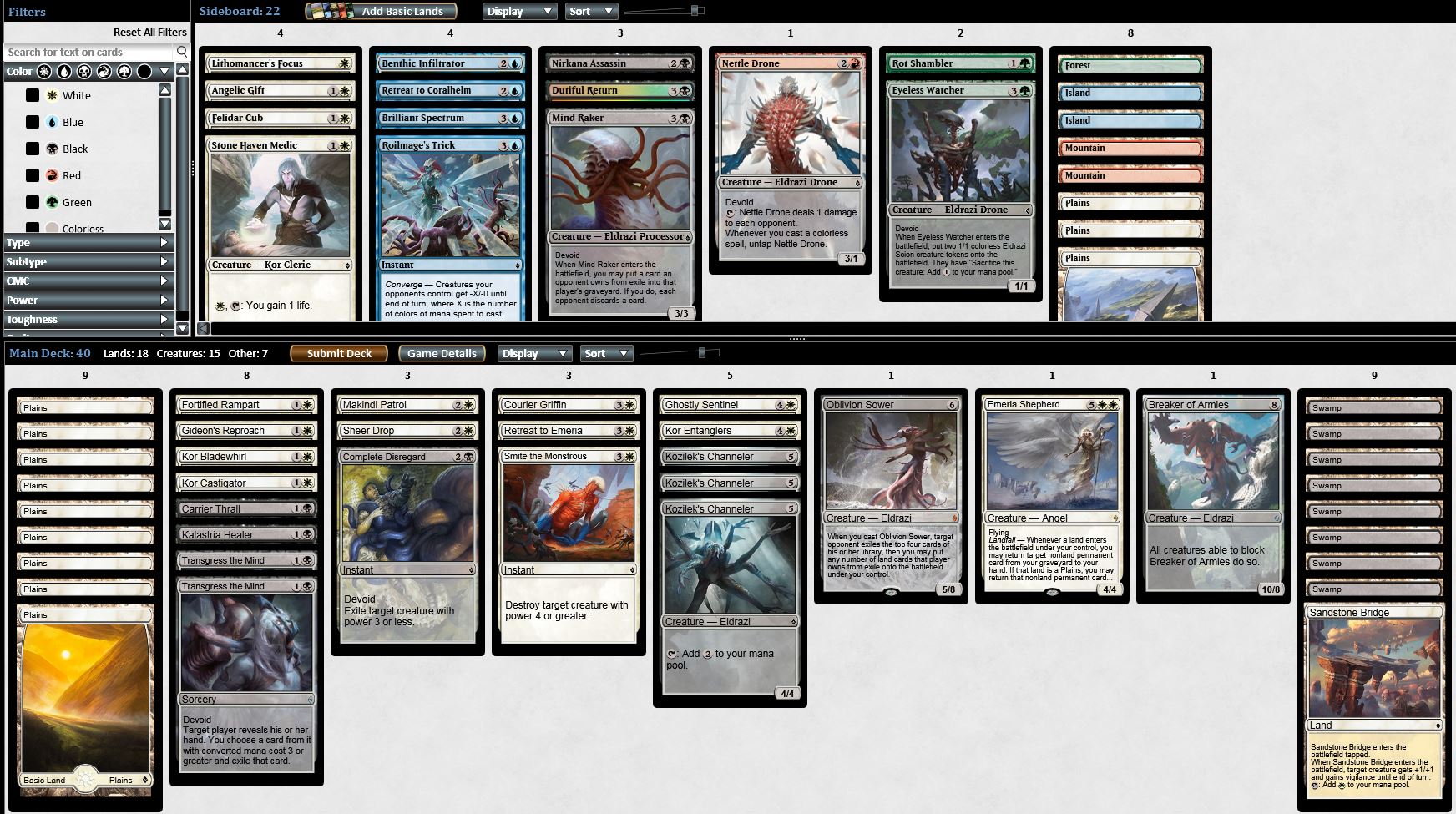 (The Breaker never showed up, but the Shepherd brought back the Sower once, which was one of the more absurd things I’ve ever seen a draft deck do.) 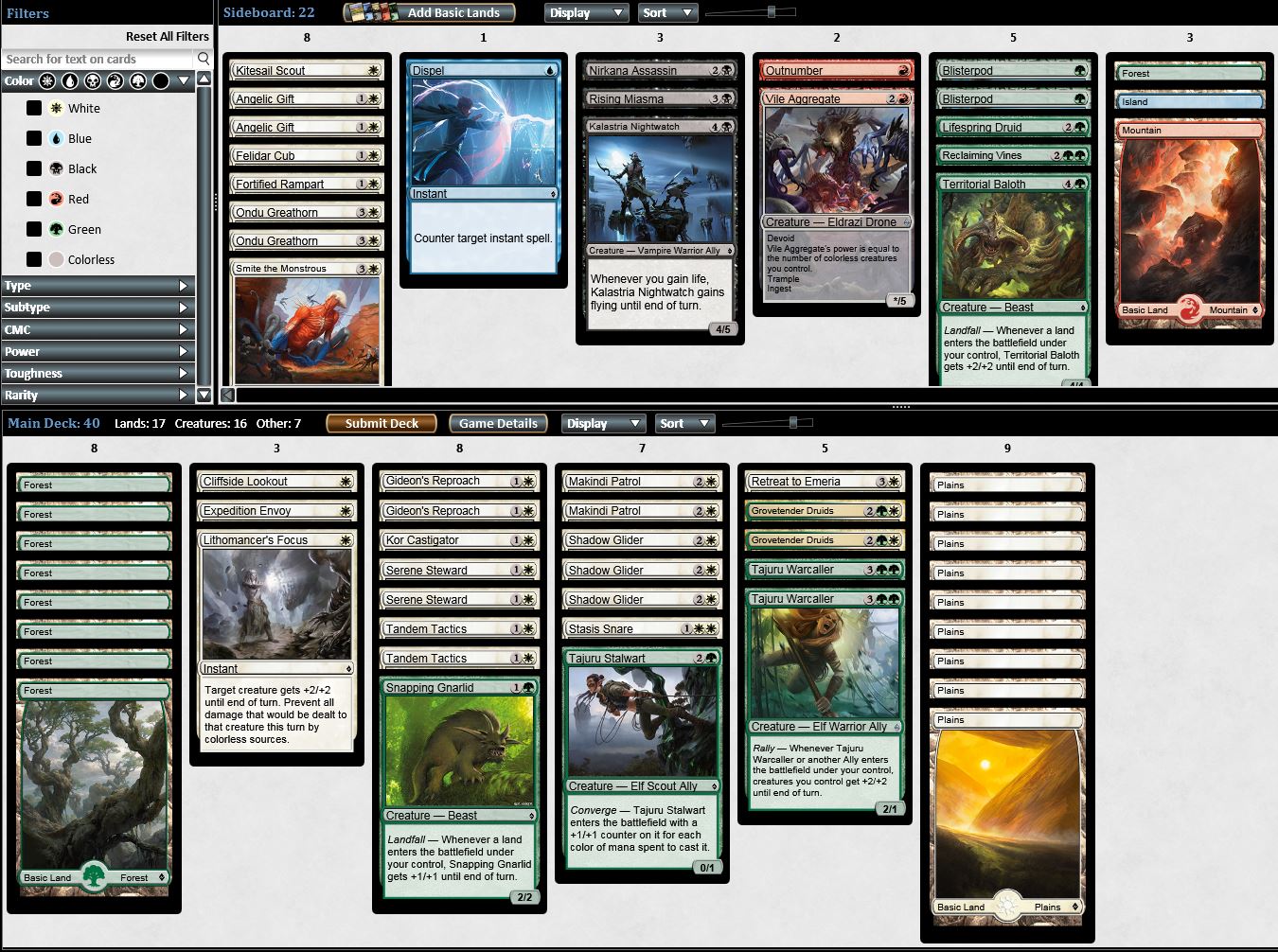 Okay, that last deck only went 2-1, but the match it lost was due to MTGO freezing on me in this situation: 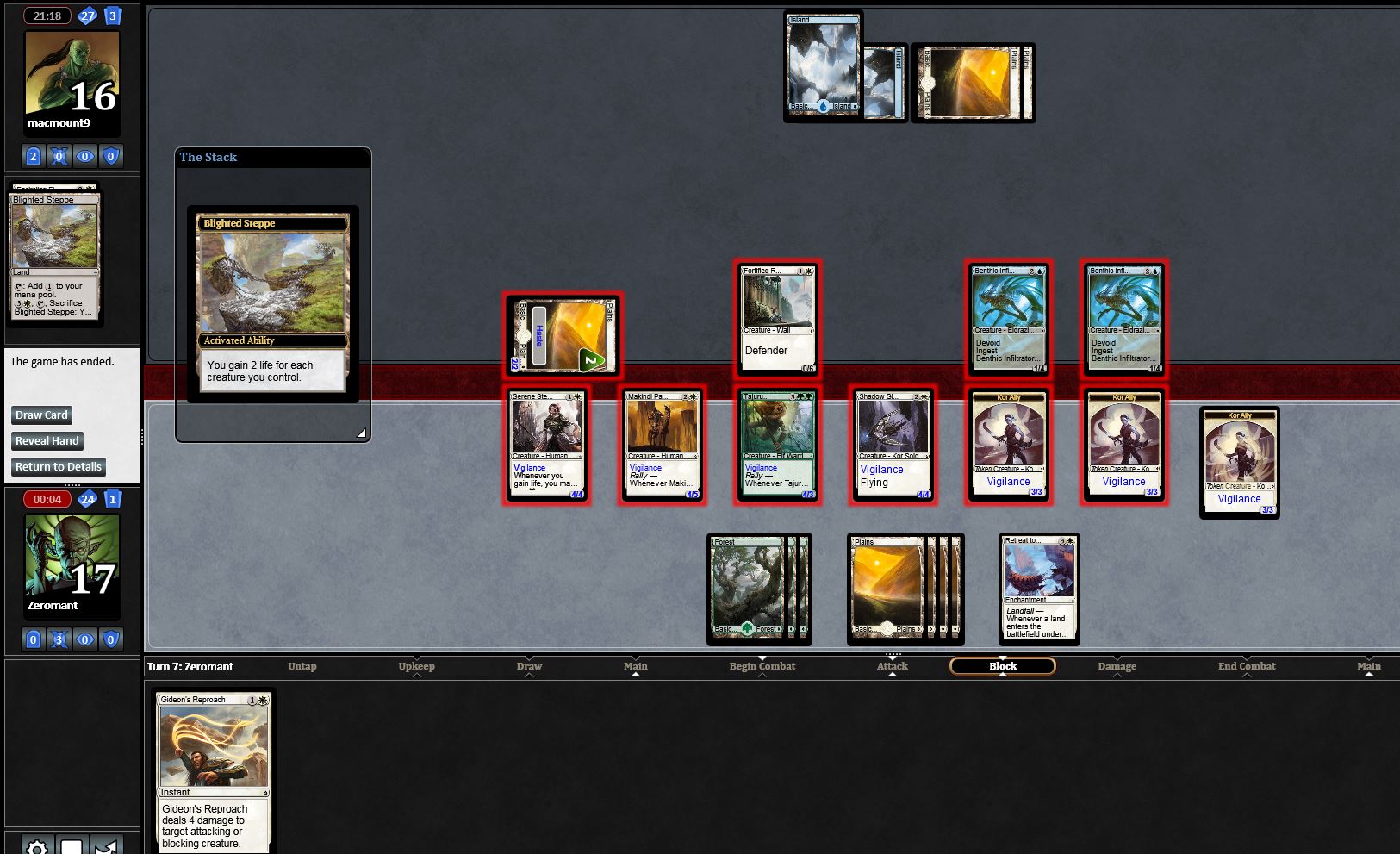 Considering the utter absurdity of this deck, and the egregious injustice of the situation, I present it among the winners. Sue me!

8 Gedanken zu „The Misery of German Magic by Numbers“