It seems I finally discovered a topic in the intersection of my own interests and that of my potential readers, so I’ll keep the ball rolling for a while. I will proceed chronologically now, addressing all cards from the original Magic set (referring to Beta instead of Alpha, though, because I consider the latter to be essentially an early misprint) which have not been reprinted in a regular set yet first. This time, I will look at the rest of the artifacts. 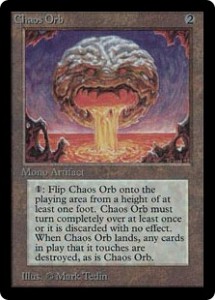 I actually do not really want to „fix“ this card, since there is no possible design I really like which would be even remotely similar in function. Let’s break it down:

1. It is extremely efficient colorless removal, which shouldn’t exist. Of course I can easily make it less efficient, but the very point of this card is its efficiency tempered by making the player jump through an especially weird hoop.

2. It is somehow „chaotic“ in nature, meaning that you cannot really be sure what will happen when you use it, although you have a certain degree of influence. While such chaos can be reproduced in several ways, I am just not a fan of that kind of effect. In my opinion, randomized libraries supply all the randomness which this game needs.

3. Most importantly, it breaks expectations what Magic gameplay is about. Specifically, it introduces manual dexterity. That kind of design space is nowadays reserved for Un-sets. The basic question is if there is a point in trying to fix a card when such a fix necessarily removes its fundamental nature.

My answer to that question would be no if this wasn’t mainly a creative exercise. I decided to provide a redesign just to meet the challenge, but if I were ever put in the position to decide if a slot in any card set will be filled with a Chaos Orb redesign or a new, conceptually completely different card, I would always choose the latter. In my book, Chaos Orb is not just bad design, it is in bad design space. Still, I will do what I am here for, keeping the „colorless removal“ and „chaotic“ aspects, but removing the efficiency and the Un-sets flair. 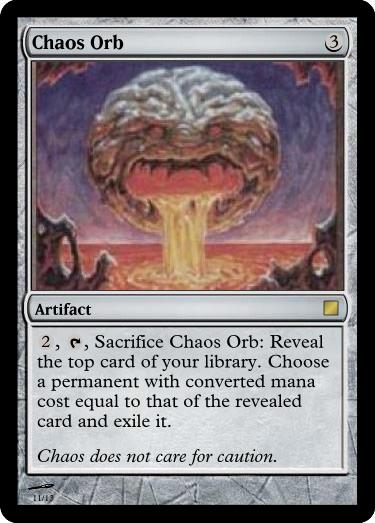 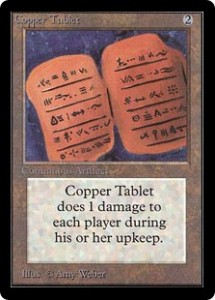 It is kinda strange that Wizards have never revisited this simple, elegant design. They have almost obsoleted it with Scalding Tongs, and of course, Red got stuff like Sulfuric Vortex and Curse of the Pierced Heart, but the basic idea of an artifact which pings each player has never been reprinted. I believe that is a shame, since all it takes is a slight upgrade to generate an interesting card. 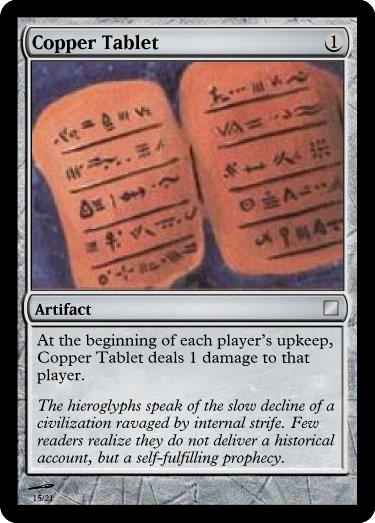 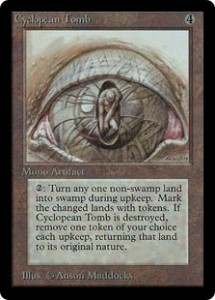 This is an extremely unwieldy and complicated card which doesn’t really do anything with any degree of efficiency – and if it were efficient at what it does, that would even be bad! Cyclopean Tomb’s initial design was about enabling swampwalk (which isn’t in use anymore), colorscrewing opponents (not something Magic design strives for nowadays), and giving yourself more swamps as manafixing or a way to grow your Nightmare or whatever (no, really). Today, it can additionally neutralize utility lands (which didn’t even exist back then).

Once again, this is a card which would be better off lost in the mists of time than redesigned, but I did my best. It didn’t help that name and artwork do not seem to have any connection whatsoever to the card’s mechanic, though… I also strongly suspect that the artist illustrated the wrong meaning of „cyclopean“, which was probably intended to denote „gigantic“. Thinking about all this mess, I decided to go with the flavor of a slow corrupting influence somehow tied to swamps which could be undone by removing the Tomb. 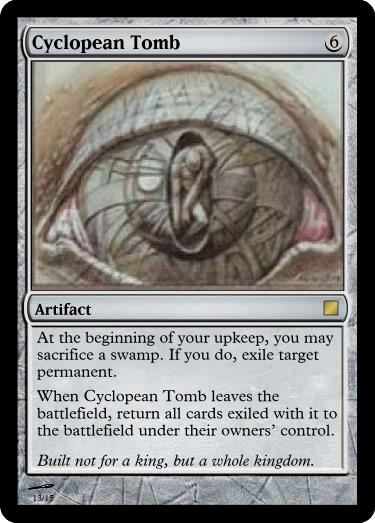 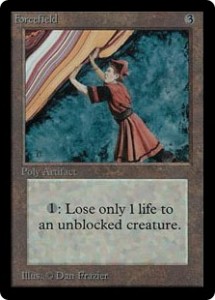 Forcefield is one of those rares sitting in the awkward space of being not good enough for constructed, but potentially oppressive in limited. Actually, it is not even that good in limited either, because there are many situations where it does little or nothing, but it’s quite unfun to play against when it works. My goal thus was to make it less dominating in those situations, but more useful generally. 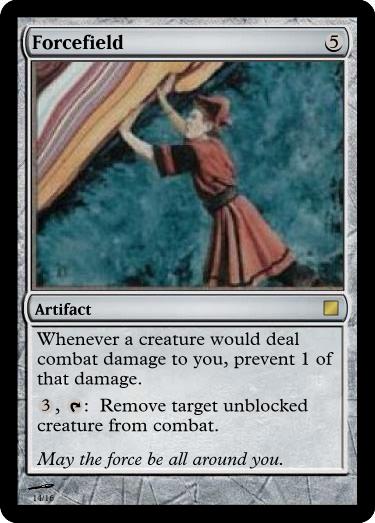 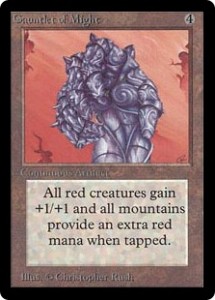 I actually like that card as is. I do not mean there isn’t room for improvement – there certainly is – but the point of this series isn’t attempting to find the perfect versions of designs, but to fix those I consider inadequate. Gauntlet of Might, with its current Oracle wording, would be a nice rare in a contemporary set, so I’ll leave it be. 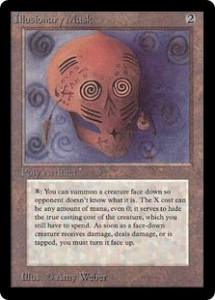 Here we go again: I like nothing about this card. No, I do not even like morph, and even less this incredibly complicated alternative way to put creatures onto the battlefield face down. The potential to abuse it with stuff like Phyrexian Dreadnought is just the icing on the cake.

However, fixing cards is also not about eliminating every concept I do not like. Face down creatures have become a staple in Magic and proven to work well enough, so it would be wrong to completely redesign this card to avoid using them. Instead, I concentrated on eliminating complexity and abuse potential. 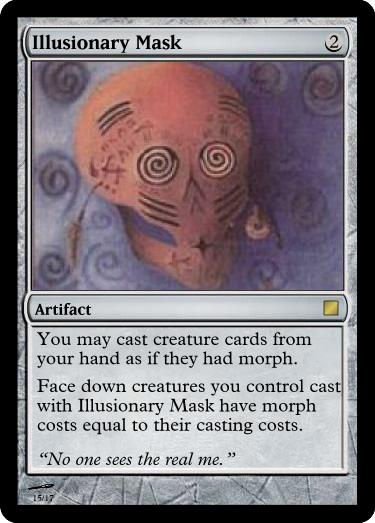 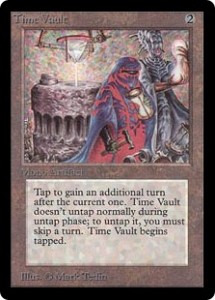 The original Magic: The Gathering set explored uncharted waters, so the high number of designs I consider fundamentally flawed should not surprise anyone. This is yet another. Any possibility to repeatedly take extra turns, even at the cost of skipping turns first, seems just ripe for abuse, and its game play value is highly dubious. And yes, this card was obviously intended not to become untapped in any other way than via skipping a turn, no matter what the current Oracle wording says – it reads clearly „to untap it, you must skip a turn“, and it definitely means it, since even in Magic’s earliest days noone could miss the brokenness of combining this with any untap effect. (There might not have been a way to untap artifacts directly yet, but Animate Artifact and Instill Energy did exist!)

I decided to create a version of this card which does leave open a few contrived ways of „cheating“ to get extra turns, but not too easy ones, and not unbounded. Even more than with Illusionary Mask, it should prove my willingness to design cards which are „not for me“, at least in the context of this exercise. 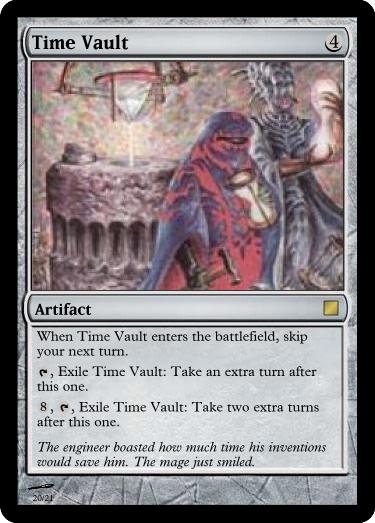