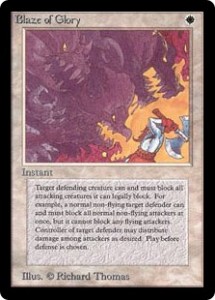 Wizards redesigned that card a decade ago in a very clean way: 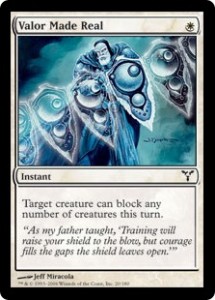 However, I’m not satisfied with that solution. I do not mind that the fringe utility of forcing an opponent’s creature to block has disappeared – that’s not what this design was about, and it didn’t feel especially white either – but I do mind that this card is unplayably weak even in limited. That is easily amended, though: 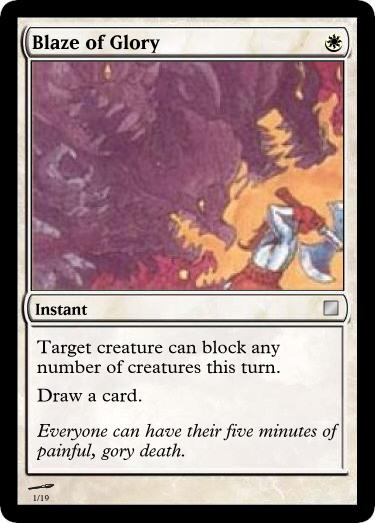 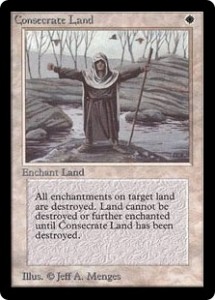 Yet another unplayably weak card. Using one card only to protect another is rarely efficient. I doesn’t get better if that other card is already somehow protected by its card type (at least nowadays), and a single card of that type is usually less important than permanents of other types. I suppose it was designed to help a little against Flashfires, and to combo with one’s own Armageddon…

Well, my misson is to make each card playable in limited – at least in some reasonably frequently encountered situations in some environments – so I have to give Consecrate Land a bit of a different spin, since all realistic applications of its initial function are constructed only (mostly casual constructed). I feel that consecrating a land should not only protect the land itself, but also those living on it; and this flavor translates well into a mechanic, because you now have a permanent actually worth protecting. 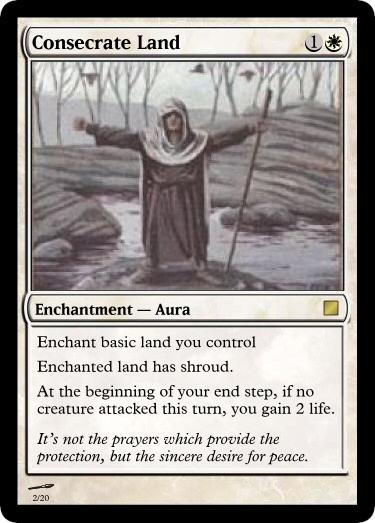 (Yes, I am aware that in modern Magic design hexproof has replaced shroud. I consider this an egregious mistake which needs to be fixed, though!) 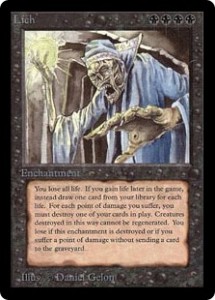 Here we have another of those bizarre old designs which I believe would be best off ignored. Wizards seem to disagree, however, as they have revisited this concept a few times, for example with Lich’s Tomb and Nefarious Lich.

There is a lot wrong with this card: Its prohibitive mana cost, its complexity, its weirdness that causes rules issues, and its complete unplayability in normal settings coupled with its potential to be abused (think Nourishing Shoal and the like). Then there is the idea that you lose the game if that enchantment disappears, which admittedly resonates with the card’s flavor, but makes for terrible gameplay. On top of that, I do not even think it makes too much sense to convey the state of being undead with having zero life in Magic.

I opted for a clean design focussing on playability while preserving an element of risk here, borrowing concepts from existing cards (Crumbling Sanctuary, Platinum Emperion). 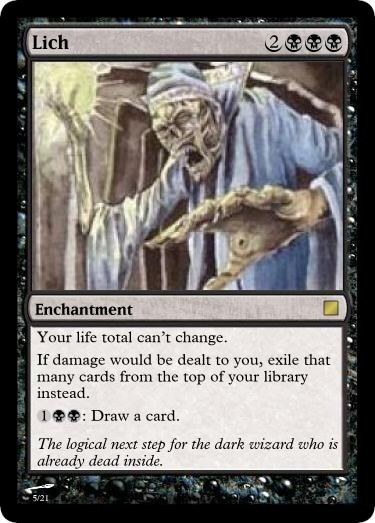 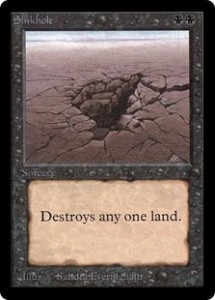 So, let us talk about land destruction. I agree with Wizards that it should never be a viable main strategy for a deck anymore. However, I still hold that the main issue with land destruction for three mana were the Llanowar Elves etc. which made it a possible turn two play. (Well, Wizards seem to finally have come around on those at least…) The fixed version of Sinkhole – Rain of Tears – saw fringe play in all formats at best, while four mana land destruction only sees constructed play if it does a whole lot more than just destroying a land. Still, for a couple of years Wizards kept weakening this kind of card until their designs were utterly unplayable in any format, like Maw of the Mire and Survey the Wreckage. They have finally bounced back a little, though, as Reclaiming Vines and Volcanic Upheaval from recent expansions show, which offer land destruction for four mana with an upside – a good place for this kind of card to be in, in my opinion.

Philosophically, my stance is that players should not have to fear an attack on their mana base if they do not abuse that security. This means land destruction should not be viable against „normal“ decks with reasonable stable mana supported by a good number of basic lands, but it should be possible to punish greedy mana bases (for example, splashing for a color using only a single land producing it which can be fetched in multiple ways; or excessively using non-basic lands), as well as strategies relying on utility lands, land auras or massive ramp. I believe that three mana land destruction which actually cannot be used before turn three fits that paradigm. Thus, Rain of Tears is fine with me for constructed purposes. I also believe that removal which only can hit non-basic lands should be allowed to be a bit more efficient. 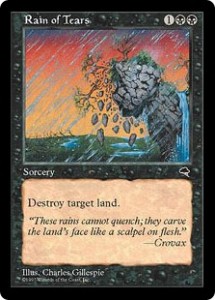 Back to fixing Sinkhole: The reason I do not just say „I’m fine with Rain of Tears“ and call it a day is limited. A spell which only destroys a land is simply bad in limited unless a specific environment is warped very heavily towards giving lands value. Take Battle for Zendikar limited as an example: Awaken played a big part here, converge encouraged greedy splashes, and there were a couple strong utility lands at uncommon – and yet, Volcanic Upheaval was still 99% unplayable, and even the much more versatile Reclaiming Vines a rarely used sideboard card. While it is certainly possible to crank up the importance of lands even more (for example, by additionally introducing common manlands and dual lands), I do not think I should design cards specifically for such an outlier format.

In an environment warped too strongly towards lands, there is also the danger that three mana land destruction might suddenly become maindeckable. Usually, trading a spell for an opponent’s land isn’t a great deal in limited as well as in constructed, but it’s closer here, because limited mana bases are more shaky, and spell efficiency isn’t nearly as high as in constructed. A reasonable chance to actually have a big impact in a land-centric environment might push a card like Rain of Tears over the edge, or at least close enough that many players will start to use it, even if that is not correct – and then we have the very issue of those non-fun games which are about possibly colorscrewing decks with perfectly reasonable mana bases.

This is why three mana land destruction which can hit basic lands wasn’t on the table for me, meaning I actually had to find a new design. Going with the flavor of the card name, my thoughts immediately went towards a concept which has already found a home in Red (Fissure), and a bit later even spawned a variant in Black (Befoul). I can accept Befoul as is, although I feel it should lose the „non-black“ restriction, but I decided to instead try a concept that Black does not share with Red, and that plays less as „creature removal with a land destruction option attached“ and more like „land destruction you might actually want to use in land-centric environments“. 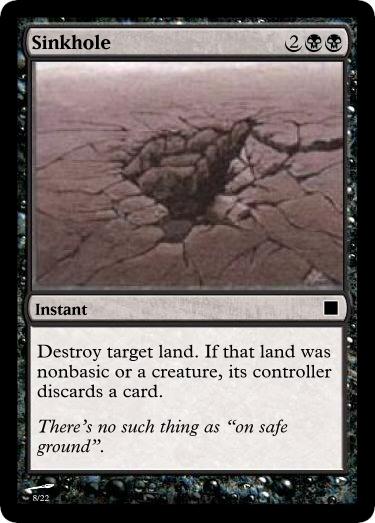 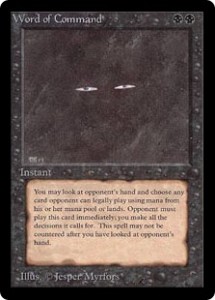 While you could argue that designs like Psychic Theft or Psychic Intrusion are closer mechanically to this nearly illegible abomination, in my opinion its vibe is best captured by Worst Fears, which I accept as a fixed version, although I would have preferred to cost it at 4BBB (and I do not use mythic rarity on principle). It may look quite different, but it is actually pretty exactly where I was going with my redesign before I remembered that such a card already exists. 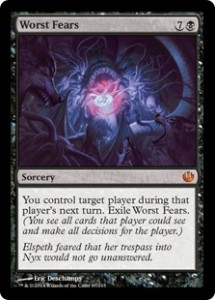