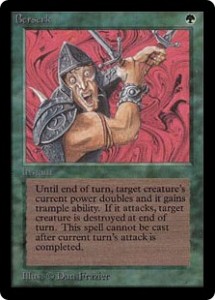 Wizards have already tried to fix Berserk several times. Their first attempt involving its initial aspect of doubling the creature’s power was Surge of Strength, while the closest was Fatal Frenzy, completing the move of this design into Red. But I just noticed that the original isn’t actually quite as overpowered as many remember – take a look at this card from a recent set: 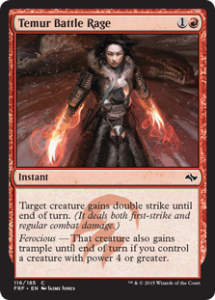 Just like Berserk, it effectively doubles the creature’s power, and in those cases where Berserk might seem overpowered, it also gives trample! And all that for only two mana without killing the creature (okay, this takes away the option of killing an opponent’s creature with it, but that was just a fringe use of that card)!

I have to conclude that Berserk isn’t really much too strong, but mainly too awkwardly phrased. In my redesign however, I decided to get a bit out of the way of Temur Battle Rage, accepting that this effect is now in Red for whatever reason, and concentrate on the flavor-driven aspect of killing the berserked creature instead. That reduces the card’s value as a finisher, but gives Green some kind of roundabout removal (something it is still in dire need of), while not violating the paradigm that green removal must be tied to it having creatures in some way. 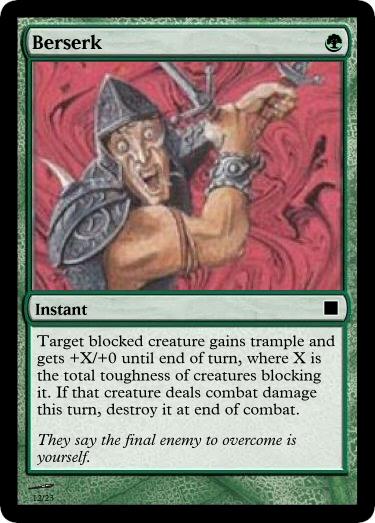 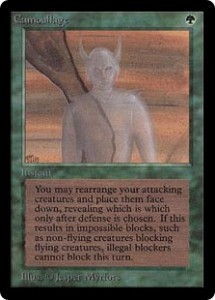 When a card’s Oracle text is twice as long as its original rules text which already fills up its text box to the brim, you know that you’re looking at a design which just doesn’t work. I tried to preserve the surprise element of making the opponent deal with your board in an unexpected way, and exercised a bit of creative license otherwise. Fudging with creature stats in this way is possibly more a blue effect, but I see no reason why it couldn’t be at least secondary in Green. 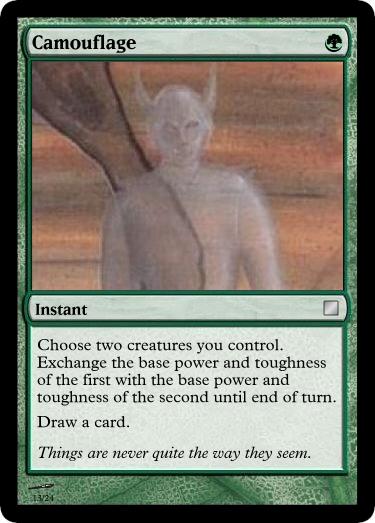 (It’s a pity that Americans probably won’t get the flavor text reference.) 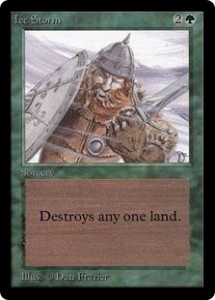 I just discussed the issues of land destruction in the previous installment of this series. I decided to create a four mana spell with upside again, somehow mirroring my Sinkhole design. 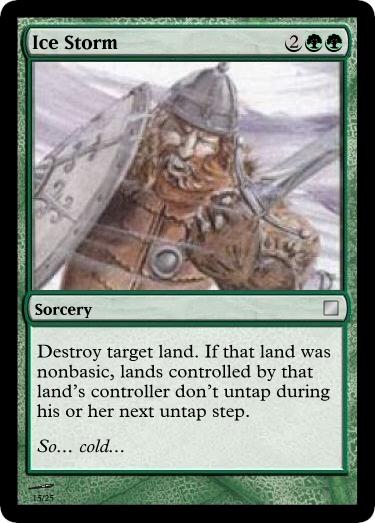 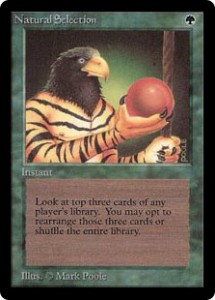 Well, when you have a card which does almost nothing, you can usually save it by turning it into a cantrip. You will have noticed that I already used that trick a few times. This card, though, would just have turned out really annoying if I had done that. I instead went with a typical green effect matching the card name’s flavor (trying to match that art would have been futile). 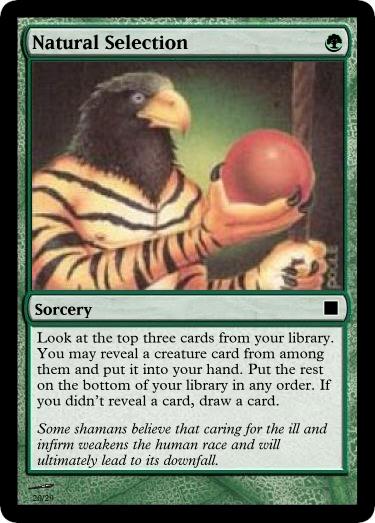 (My original design had a flaw pointed out by Max in the comments: The cards looked at were, of course, still in the library! That meant that you drew one of the three cards you had looked at if you didn’t reveal, which was not my intent, and also lead to the issue of having to prove which card you drew. Max’s suggestion to fix my fix was what I actually wanted the card to do in the first place, so I adopted it.)