It seems moderate interest in this series is still there, so I might keep it up a little longer, although I’m not sure if my posting frequency will stay quite as high. This is the final installment addressing cards last seen in Beta (among regular sets). 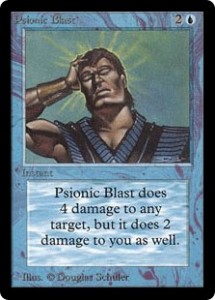 I was not sure if I should include Psionic Blast, since it has been reprinted in a regular set (Time Spiral). On the other hand, it is pretty clear that this set’s timeshifted cards should not count, since they do not reflect the design philosophy of the time when they were published. I the end, I was just shirking from having to explain my stance on Magic’s color pie, but I wanted to talk about it at some time anyway, so here we go:

I am convinced that the strictness with which R&D (and in this case, that means mostly Mark Rosewater himself) enforces color taboos is a mistake. Note that I talk about taboos, because that’s what they really are, not just weaknesses, even though they are being slowly eroded nowadays for good reasons (Green being allowed to remove creatures if this process somehow involves own creatures, White being allowed to draw cards if this ties in with a specific subtheme like equipment, etc.) If it were fine for Green to have Hornet Sting and Desert Twister (which it should be in my opinion, but Rosewater is adamantly against this), unconditional creature removal would be Green’s weakness. If Green is not even allowed to have a barely playable card like Hornet Sting or an overpriced card like Desert Twister, that is a taboo. 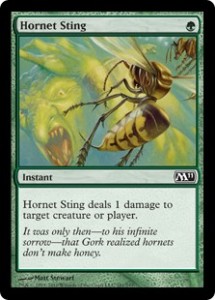 To illustrate my point, think of an adventurer group in a class-based roleplaying game – you know, the kind where a fighter, a thief, a cleric and a wizard drink together in a tavern, when suddenly a wealthy stranger approaches them with a treasure map and a tale of great danger… It is important for those kinds of games that their character classes are balanced out. Each needs a niche of something important they do much better than the others, or there would be no reason (okay, apart from actual, you know, roleplaying) for players to run a character from that class. The wizard should not be able to beat up people with his bare hands or wear heavy armor, the cleric should not be able to throw fireballs at a distant enemy or become invisble, the thief should not be able to turn away undead or instantly heal wounds, and the fighter should not be able to pick locks or creep over a battlefield unnoticed. And so on. Each class needs to have strengths and weaknesses to justify its existence, just like the colors in Magic

However, applying Rosewater’s ideas about the color pie to this example, the wizard would be too weak to even walk normally (hey, he can learn spells to fly and teleport after all!); the cleric would be blind (no worry, he’s guided by his god, right?); the thief would helplessly bleed to death from the smallest scratch; and the fighter would be too dumb to speak.

That freakshow mirrors the inability of colors to interact with some opponents‘ game plans even in the most basic way. Black is not bad at dealing with artifacts, it can’t do anything about them at all once they’ve hit the battlefield. The same goes for Red and enchantments, and for a long time it was also true for Green and utility creatures. To compensate for that lack of interaction, in Magic’s early years the colors‘ strengths were exaggerated ever more, leading to the brokenness of cards like Fireblast or Hatred (with both Dark Ritual and Culling the Weak legal at the time, to provide context) – and that was still before Urza Block pulled out all the stops! It makes some kind of twisted sense: If you cannot interact with your opponent’s game plan, you need to win faster. 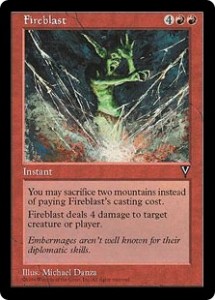 Green found another way, becoming the color you would play if you wanted to play all other colors by getting ridiculously good manafixing. I don’t think the color pie makes much sense if it assigns one color the strength to use the strengths of all other colors, though… In the same vein, I really do not get the argument that colorless spells (not Grey, but colorless spells only requiring generic mana) are allowed to do what some colors aren’t. A recent case in point: Scour from Existence. Yes, that card is even a bit less efficient than Desert Twister, but Rosewater’s stance is explicitly that efficiency does not matter! This is where his reasoning simply breaks down. And it certainly does not help that colorless spells actually have even been allowed to do stuff some colors are forbidden to do at all pretty efficiently during Magic’s history (examples are Nevinyrral’s Disk) or Duplicant – oh, and then there was that phyrexian mana thingy, which must count as well!)

It all boils down to Wizards consciously implementing ways to cheat the color pie, while nominally upholding their strict interpretation of it: Colorless spells, too easy manafixing, rarity-driven exceptions (they will usually explain those as flavor-driven, though) – they have realized Magic does not work if decks cannot reliably interact, but they have not drawn the correct conclusion yet: That colors should not have taboos, but merely weaknesses; and that a color’s philosophical identity should not dictate if it is able to interact with basic game elements, but how. Giving Green fight (and recently, even one-sided fight) was a step in the right direction, necessitated by the dynamics of limited play where the ability to neutralize opposing creatures is essential to the viability of almost every deck, but there is still a lot to do. 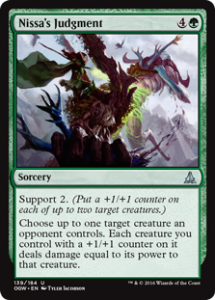 Okay, now that I have explained why it is important that each color is able to interact with the basic elements of the game, I have to concede that there is no dire need for Blue to have access to direct damage like Psionic Blast. That is not my point though – it is that color taboos, in contrast to weaknesses, shouldn’t exist in the first place, and that it is fine for a color to do something which does not obviously fit its philosophy if it does it in a very color-specific way (and not too efficiently). This is what the flavor of psionics in Magic is about: Being able to hurt someone with a direct mental attack, but hurting yourself in the process. If you follow the game’s back-story (which I do only sporadically myself), you might know that this is exactly what Jace did to defeat Alhammarret, so this concept from the very first Magic set is still a part of the game today at least philosophically.

The long and the short of it: I did not change Psionic Blast’s function of dealing damage directly, because I believe that this specific way to do it fits Blue flavorwise as long as it isn’t too efficient. I just made sure that the backlash is big enough to not make the card a utility staple, and that limited decks would not be able to splash for it, since you really should not splash Blue for direct damage. 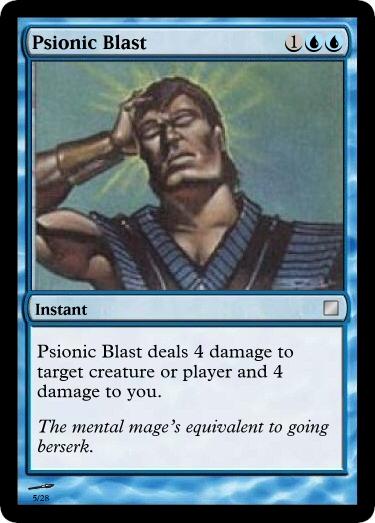 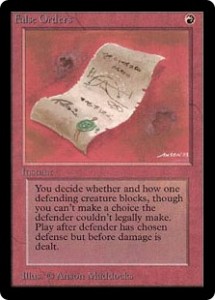 I think the basic idea of this card is fine. All it needed was to be cleaned up and made a bit more versatile. I took a page from Master Warcraft here, although that meant borrowing the ability which stops a creature from attacking for a turn from White, but in the context of this card, and fitting in with its chaotic flavor, I feel this was justified. Note that I replicated the timing restriction from Master Warcraft not because I believe it is necessary on either card, but because I am not absolutely sure it is not. Maybe the cards could do something they’re not supposed to without it because of some obscure rules interaction I am not aware of. 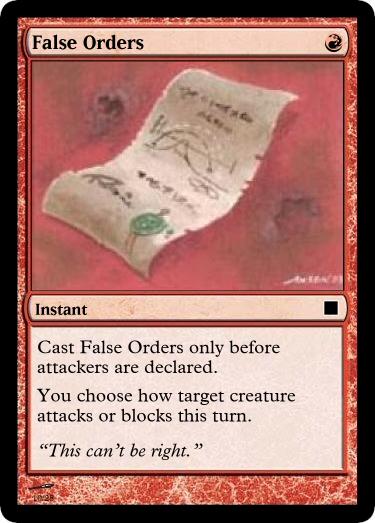 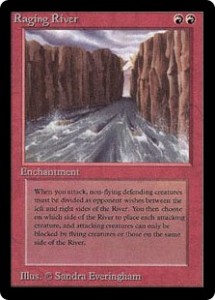 Among all cards from Beta, Raging River might be the one whose concept is the least compatible with modern Magic design. Setting aside for a moment the incredible complexity of its mechanic: What the heck is red about a raging river, apart from apparently making your creatures harder to block? Since I do not think the mechanical concept of this card can be salvaged, a redesign has to lean on its flavor, and that is decidedly not red. Quite the dilemma! But you know what they say: „We’ll fix it in the flavor text.“ 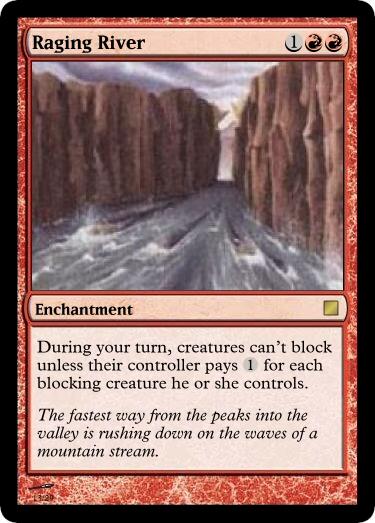 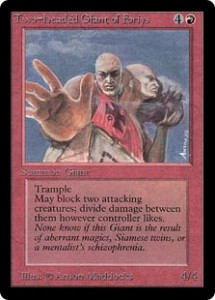 Lastly, another design I am just fine with (using its Oracle wording, obviously). Okay, Red is not supposed to be especially great at blocking, but it still does block a lot, and with this card’s concept fitting nicely into Red, I don’t see a real issue here. I would have preferred a double-colored cost, but that seems not important enough to merit a redesign. If Two-Headed Giant of Foriys was not on the Reserved List, it would make a perfectly fine reprint in a current set, although probably at uncommon.