Like with Beta, I will only look at those cards which have not been properly reprinted in the meantime.

A note about the scope of my redesigns: I will always keep the name and the color affiliations of the original card. Obviously, some old card names are problematic – especially the real world references in Arabian Nights – and would be out of bounds for a real redesign. However, I consider the name as one of the defining aspects of the cards I redesign. Also, many card concepts work best (or only) if colorshifted, and some already have been. I’d rather change the card’s concept to fit its color affiliation, though. 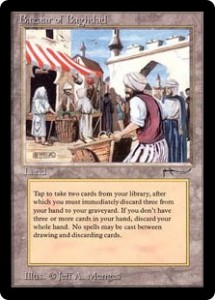 Nearly unplayable in fair decks, broken in unfair decks – just the kind of card I despise the most! In this case, however, fixing the power level (and adding a mana ability) should suffice. 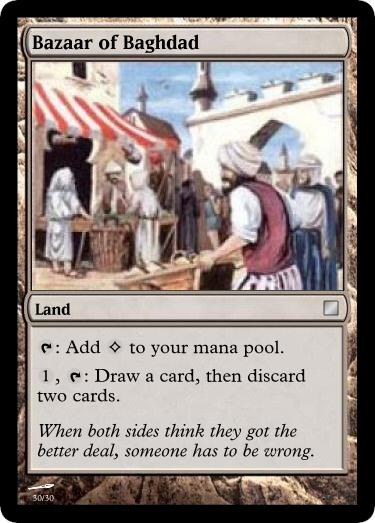 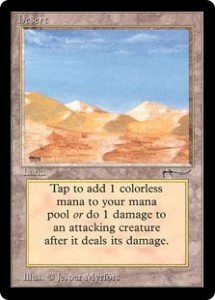 Power level in constructed isn’t the issue here, but I take exception to the role this card plays in limited, crippling small attackers (and also effectively enhancing blockers) for way too little cost. Additionally, I am not happy with the timing restriction for reasons of elegance and grokkability, and I also do not really get what it means that you need to tap this land for its effect – either your opponent has to cross the desert to get to you or not. I thus went for the flavor of retreating to a stronghold surrounded by desert(s) protecting you without the need to get active. 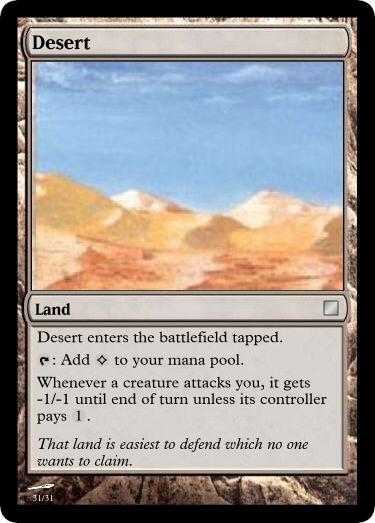 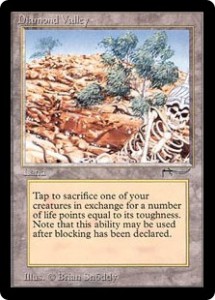 Wizards have already printed a fixed version of that card. I’m not a fan of legendary lands (actually, not a fan of the legendary concept at all), I believe that activation cost could be a mana cheaper, and there is no need to make this a rare, but this design is close enough for me. 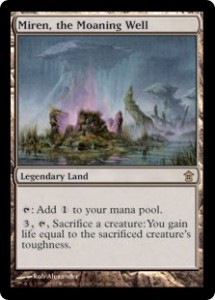 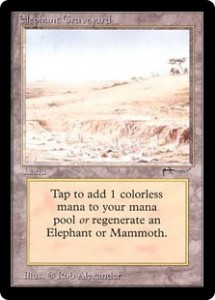 This ability would be majorly annoying in any limited environment featuring elephants, even with a reasonably high mana cost attached (it’s definitely undercosted with tapping the land as the only cost). I do not think repeated regeneration on a land is a great idea at all. Also, I’m not sure why a graveyard should allow you to regenerate your creatures in the first place! I decided to go with a different concept fitting the flavor better. I do not think my design is less powerful, but it requires a heavier commitment to an elephant tribal theme to pay off. 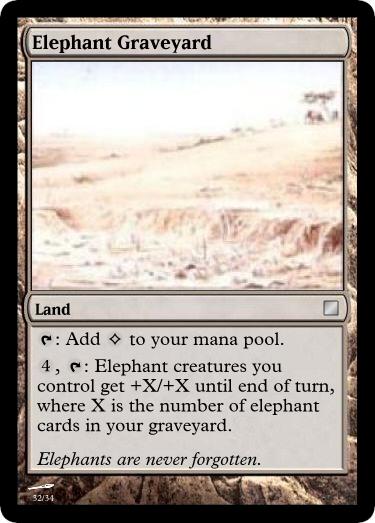 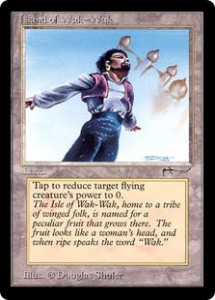 Apart from the unacceptable name (an island which isn’t an island!) and the unclear concept, this card is fine if it gets the usual treatment of adding a mana ability and increasing the cost for its activated ability. Oh, and maybe a quote, rephrased from the original story, which actually relates at least somehow to what the card does. 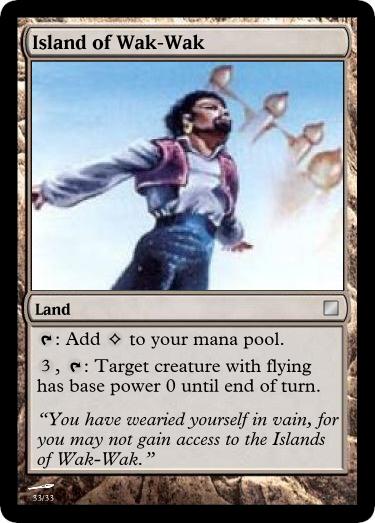 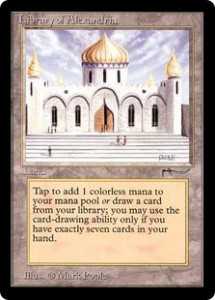 Lastly, we have the most overpowered land from Magic’s early history – isn’t it funny how the Library even possesses a mana ability, when Diamond Valley and Oasis don’t? Making this ability more expensive can solve the power level issue, but the whole concept seems wrong to me, making the rich even richer – Sea Gate Wreckage makes so much more sense!

So, the basic idea here is that knowledge begets knowledge, which is of course true, but really problematic in game terms. An abundance of hand cards enabling you to draw additional cards is worse than the already dangerous ramp concept of spending a lot of mana to gain access to even more mana. While people habitually use card draw to draw into more card draw, there should not be a bonus for already having a full grip.

I could just have designed a generic card-drawing land (costing a boatload of mana to activate), but I wanted to use a concept related to the flavor of a library as a place where you search for knowledge instead. 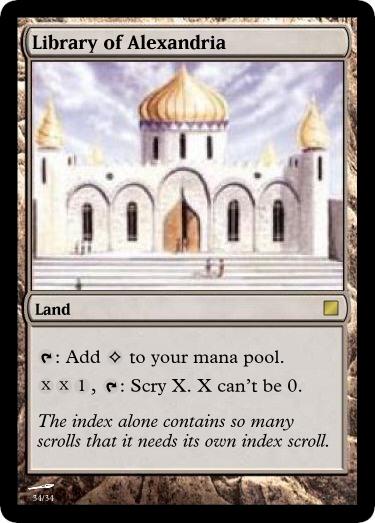