City in a Bottle 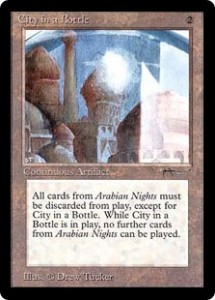 Expansion hosers are among the most stupid concepts in Magic (excluding Un-sets), only behind ante, subgaming, and manual dexterity cards. So, my mission was to design a completely new mechanic fitting the flavor concept. 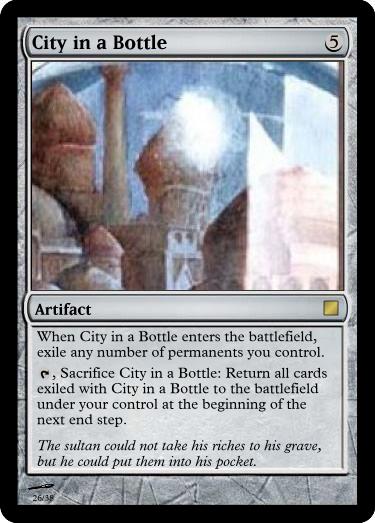 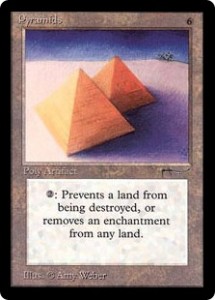 Like with Consecrate Land, this mechanic is of dubious value, but unlike with that enchantment, I did not feel the necessity to connect my design to it at all, since it makes no sense flavorwise – how would pyramids protect lands? For me, the cardinal question was if I should change this card into a land, since pyramids are mightily big artifacts, but I decided to keep them as such and create a concept appropriate to their size. 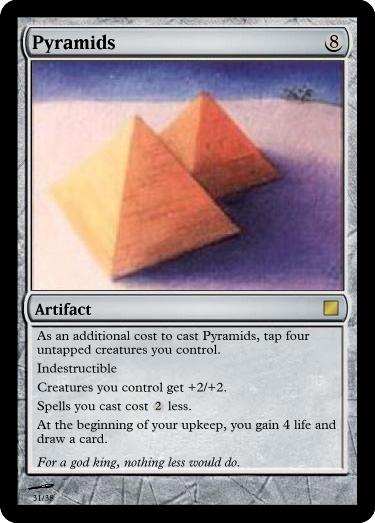 (Yes, this would be a mythic rare if I was using that rarity.) 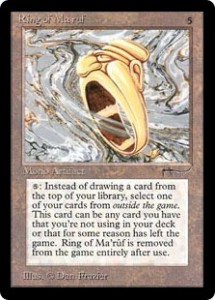 Getting cards from outside the game is closely behind expansion hosers on the idiocy scale for me, as is the tournament application of this mechanic which fetches a card from the sideboard. However, Wizards seem to disagree, having revisited that mechanic a couple of times, most recently on Spawnsire of Ulamog. In my opinion, though, cards which work differently in a tournament setting are a clear indication of design failure, and thus the Ring needs fundamental fixing including acquiring a new concept. We know from the story that it contains a djinn who fulfills Ma’ruf’s wishes, but turns against him when his owner foolishly lends the ring to seomeone else, so this is what I got to work with. 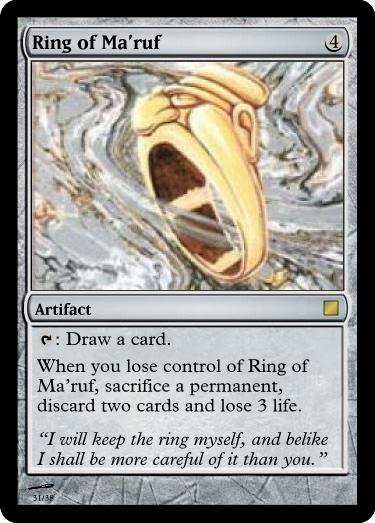 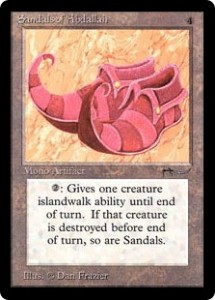 Giving a creature islandwalk is just not an effect any limited environment wants, so once again a new mechanic was needed. I was unable to find a specific source for this card concept, but it seems obvious that a pair of magical sandals would provide its wearer with an ability somewhere in the spectrum between being able to walk on water, though the air, or with high speed. Therefore, a fixed version of this card already exists, albeit shifted to a different cultural background, and I see no need to create my own version. 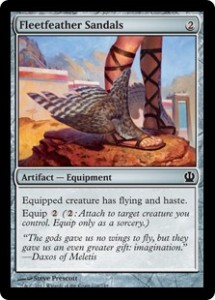