I’ll very probably keep going until I have finished Arabian Nights, but I’m yet undecided if I should proceed to Antiquities afterwards. 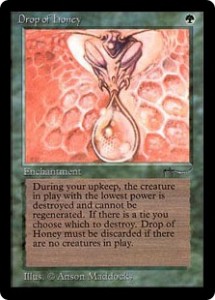 While I do not especially like this card concept, it works under its current Oracle wording. The issue, however, is that this is not a green effect. It has been reprinted in White as Porphyry Nodes, but since Planar Chaos was explicitly about colorshifting cards from their core color identity to a fringe color identity, it is possible that Wizards do not consider this effect truly white either – if so, my best guess would be that it’s black.

Anyway, my task was to find a similar card concept which works both in Green and with the card name (which is referring to a story from One Thousand and One Nights, where a drop of honey attracts a couple of flies, who then attract a bird eating them, who attracts a cat catching it, and so on, until the whole region is at war). Well, we know Green allows you to destroy creatures if your own creatures are somehow involved, so this wasn’t too hard. 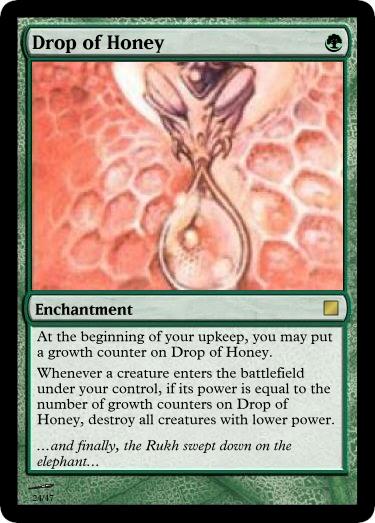 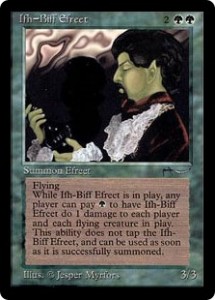 This card showcases very well how different (and less precisely defined) the color pie – which didn’t have that name then – was in Magic’s early days. Direct damage in Green is an absolute no-go today, and Green isn’t supposed to get flying creatures with any regularity either (although I strongly disagree with this philosophy). Also, the Efreet is way too powerful if you’re ahead, and even if not, way too suppressive towards opposing flying creatures. If an opponent actually has access to green mana, however, there are situations where it is flat out unplayable or outright killing you in short order if already on the battlefield, which is just too much risk for a good design. Lastly, I really do not like permanents whose abilities can be activated by all players.

Identifying its core aspects, this card is meant to be an efficient aggressive creature doing double duty as a weapon against flyers, whose deployment poses a significant risk to its controller (a prevalent theme in Arabian Nights). I just had to measure out these aspects correctly for a well-balanced limited creature. 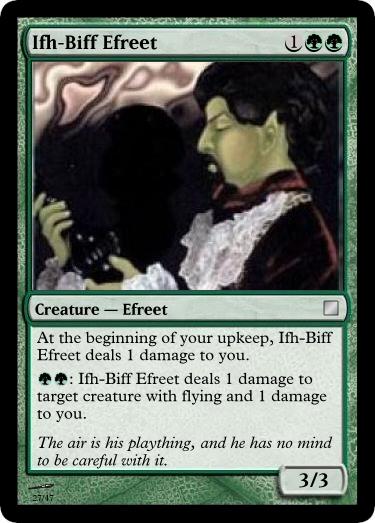 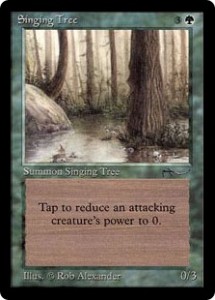 Really, isn’t this one of the most terrible artworks ever? It might do for a basic Forest – but where is a singing tree in here?

That issue aside, this card is just unattractive even in limited. Also, there are already more than enough cards in Arabian Nights which impede flyers, and the flavor here doesn’t explain this mechanic. Thus, I decided to create a powerful rare with a more generally useful ability instead – in fact, so powerful that I had to make this tree legendary to preclude having two of them on the battlefield! 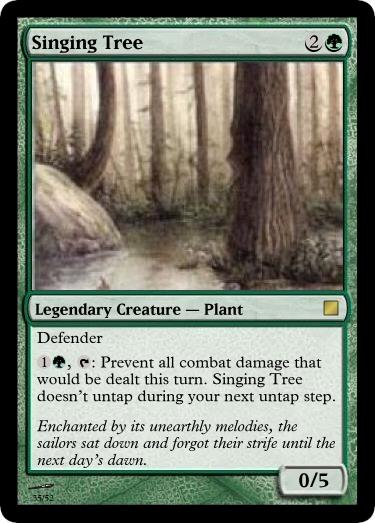