Due to the positive feedback for this series (yes, that really makes all the difference!), I will keep it up at least a little longer. However, I am considering a more fundamental change to my blogging activities which would affect fixing cards as well, but that is still in the earliest phase of consideration. 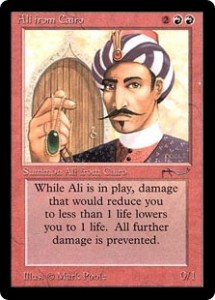 So, what we have here is an especially terrible card name, even if you accept that it references a literal figure from an earth-based story. It just means „an Ali from the story who is not Ali Baba, and about whom we do not know enough to differentiate him other than by mentioning that he stems from Cairo, which Ali Baba doesn’t, as you should realize now if you weren’t aware of it before“.

The card is supposed to play up the fact that this Ali had been rather fortunate in his life, although skimming over the story I did not find a situation where he had a near escape from death, just that he was a very successful merchant who started out with nothing (but pretended to be rich), borrowing some money and making enough profit with that to pay back his loans easily soon, while building up his business.

Thus, this card’s ability fails on all fronts: It does not really describe the character it portrays; it actually does not even protect Ali himself, but the player; and it has no business being in Red at all (it’s clearly white, as you can see on Worship). Oh, and then I’m not a fan of that kind of ability in general…

When I redid Ali’s design, I had in mind that he was a merchant, and that he also was a bit of a trickster, able to turn a bad situation he was in into a favorable one for him. I found a fitting quote in the story, and it all came together. 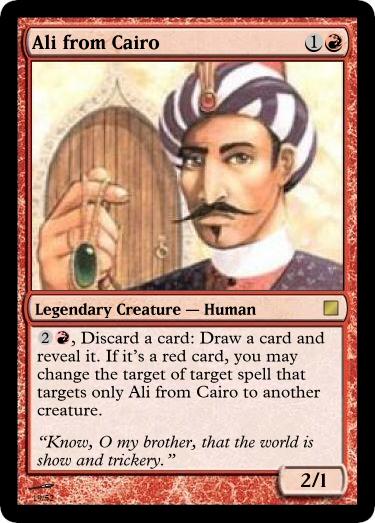 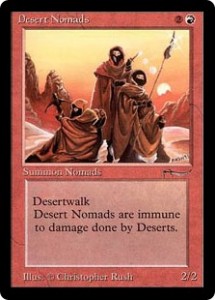 When I had first thought about that card, I had just assumed I would give it protection from lands or something similar, since referencing a single card is just too narrow a design (and no modern expansion would feature any utility land at a rarity more frequent than common anymore). But then I created my version of Desert – and protection does not even help against that! Well, I had put myself into a bind there, and needed to find a different way to counter that land’s effect on these nomads. As it turned out, the simplest solution worked well enough. Note that I consciously forewent any kind of landwalk, which is a problematic ability in limited (that’s not to say it’s great in constructed). 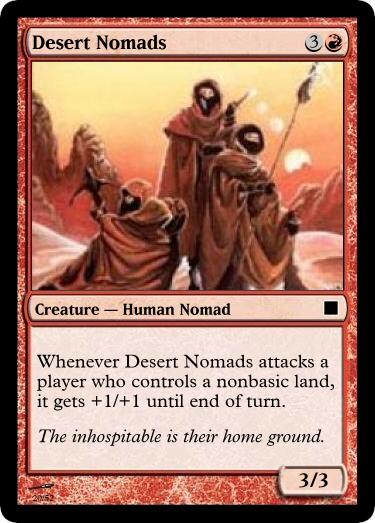 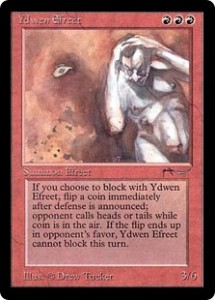 This card is named after a friend of Richard Garfield, Wendy, who married another friend of him, Jamie – so now you also know where the name Mijae Djinn comes from!

I do not like the following things about this design: First of all, the coin flip, which I not only despise in general but is also especially problematic here because of timing issues. Then, the ability is kinda irrelevant, since red decks will gladly just attack with their 3/6 creature for three mana. I’m also not a fan of triple-mana costs unless there is a good reason for them, which I do not spot here.

I decided to stay away from a design aimed at constructed, and instead create a card which would play interestingly in limited. My version of the Efreet actually even entices you to leave it back on blocking duty – of course, it might get bounced, but if that doesn’t happen (and chances are good that it won’t), your opponent just attacked into a 3/6 blocker. Still, the ability is a real disadvantage, especially when playing against evasion creatures, but then again, the stats of my version are still a bit over the curve in limited, so he should be worth the risk. 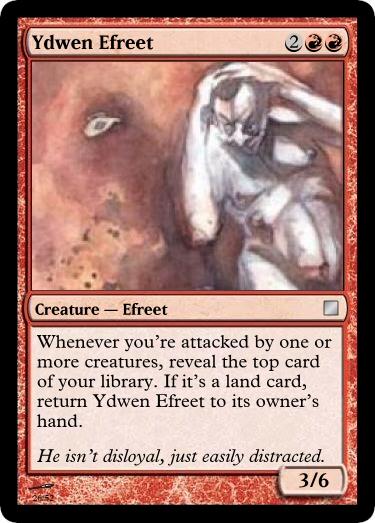