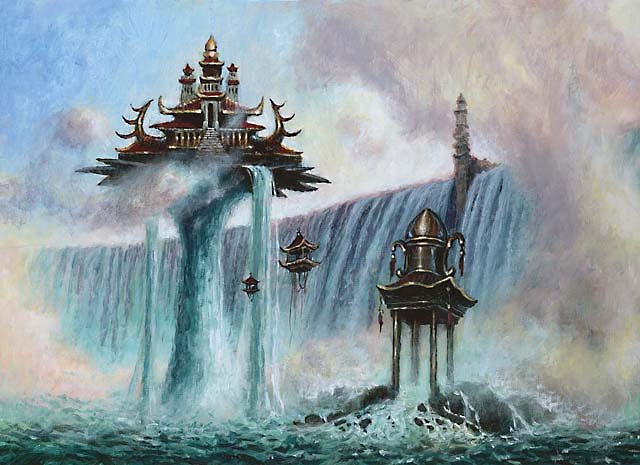 This is a followup to my article All that was wrong with Kamigawa. Therein, I claimed that this setting was not so much doomed to be a failure from its very conception, but instead just misdesigned and, most of all, terribly developed. To underscore this, I put in the effort to design a remastered version of Kamigawa block, following the precedent Wizards did set with Tempest Remastered. While obviously I could not address all the issues Kamigawa had this way, I feel it’s surprising how much more fun this environment looks if you just reduce its contents to the better designs (and shuffle a few rarities around). Honestly, I believe that my Kamigawa Remastered would even play better than the lukewarm received Tempest Remastered, because the structural issues of that ancient, venerable environment were actually greater, even though its contributing sets were far more liked!

When crunching numbers for my Kamigawa Remastered set, I adhered somewhat closely to existing formulas, only fudging a little with the rares and mythic rares, because there was no real reason not to – Tempest Remasterd never got printed, only published on Magic Online, so its numbers did not need to add up in a way conforming to printsheets. I’m not even sure that is generally still a concern nowadays, but I am aware that with the usual 53-15 distribution of rares and mythic rares in big sets, you get to print two copies of each rare and one of each mythic rare on that good old 11*11 printsheet which used to dictate set sizes and rarity distributions in Magic’s early era.

If that would ever become a real issue, I certainly could cut nine cards from among the rares and mythic rares in my Kamigawa Remastered set, but since it will almost assuredly never be, I allowed myself to deviate a little from that formula for symmetry reasons, while of course still observing the rule that the frequency with which a specific mythic rare shows up should be (very closely to) half of that with which a specific rare shows up, assuming that still every eighth rare will be replaced by a mythic rare in booster packs. This is how I got to my 60-17 distribution that fulfills this condition just as well as 53-15 does. 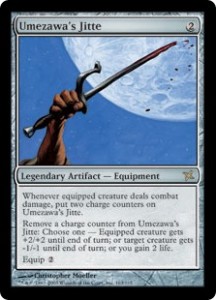 So, my set has 101 commons, 80 uncommons, 60 rares and 17 mythic rares. With the commons and uncommons, I still had to cut quite a bit of decent stuff in some colors (especially Green), while already running rather thin on others (namely Blue), and this numbers happened not only to be the usual ones, but also the best solution overall for this set. A general note about my choices: The large majority of cards is in there to enhance limited play (the designated main purpose of my set, just like with Tempest Remeastered) and to focus on recognizable aspects of the original environment (which were worth being brought back), but a few rares and mythic rares I put in there as „value“ cards – that is, cards people would be happy to open and which could drive interest into the set in addition to its appeal for drafting. (I had to do a little research here, since I’m not too familar with MTGO singles prices, especially from older sets, and there were a few cards which surprised me.) One card a thought I just had to include, even though it would have ruined nearly every limited game when it was cast, was Umezawa’s Jitte, but when I looked it up I realized with much relief that it is actually not that valuable, and could be left off my list.

Not all themes or good single designs made it, although I managed to include most of them, especially at lower rarities – the percentage of utter trash in the original expansions was so large that I had been able to cut down the number of candidates to an already reasonably-looking number after the first pass. Possibly the most glaring ommission are the common zuberas, and (relatedly) Devouring Greed. The set just had enough power-1-creatures without them, and the very linear strategy making the best use of them wouldn’t have made for good gameplay. In Modern Masters 2015, the overall density of spirits had been lower, while at the same time the overall power level of decks was much higher, so Devouring Greed was acceptable there, but it would not have been in Kamigawa Remastered. Waxmane Baku fell to the wayside for the same reason, although I wasn’t too keen on that cycle in general, since I wanted to cut down on the number of counters used in games. 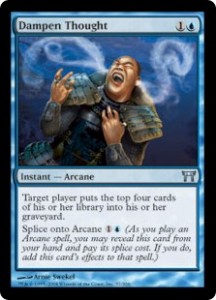 The other big omission was Dampen Thought. If you weren’t around at that time: This instant was to triple Champions of Kamigawa draft what Spider Spawning was to triple Innistrad draft – a build-around uncommon leading to a very unique deck which was really hard to interact with. Many people call that „fun“, while I call it „shitty gameplay“. I did not only cull that card to avoid those non-interactive games, though: Just like Waxmane Baku it had already been strong when you had to struggle to get enough playable cards synergizing with it, but in a set with plenty of such playables it would have been repressively overpowered.

Another theme that had to be adjusted for similar reasons is soulshift, whose creatures mostly moved from common to uncommon. Spiritcraft is now a bit less unevenly spread over the colors, which required a few unexpected cuts (for example, Elder Pine of Jukai lost out in the crunch), and splice onto arcane should play an important part in the environment. Samurai and snake tribal are now on much more equal footing with other themes, and ogre/demon synergies should work more reliable as well. I also moved a few more legendary creatures down to uncommon, to finally make that theme relevant. Ninjas will show up quite frequently (but not too frequently). Soratami, Hondens, Genjus and spirit dragons are all still there at rarities which make sense, the more playable of those weird equipments have made it, and each color got at least one cool flip card.

One thing I did was to adjust the set’s removal – it’s important that there’s plenty of it, so I upped its frequency, but the original rarities didn’t always check out. Even more important was to give each color a solid creature base, which proved a bit tougher – the overall quality mostly works out, I believe, but I could not prevent a noticeable weakness of Red in the lategame, and a similar weakness of Blue in the earlygame. However, in 2-color-decks one should be able to find balanced decks with those colors as well. 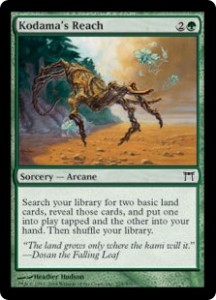 That reminds me of a third big omission: Green manafixing, specifically via Sakura-Tribe Elder and Kodama’s Reach. Now, if you follow my thoughts on cube-building, you know that I do not like Green being the color enabling you to play other colors, but I did not design Kamigawa Remastered in the way I design one of my Next Level Cubes. The thing is just – these cards are too good in an environment which features practically no other fixing (yes, those lands are just unplayable), forcing non-green drafters to restrict themselves to two colors, and even heavily encouraging them to priorize one of those. I had them at uncommon for that reason, so that they enabled at least a buildaround multicolor archetype, but I realized they still would have made it too easy to play the best-of splice deck while ramping you towards big legendary creatures and incidentally allowing you to use all Hondens. Also, Green was the one color which was absolutely crammed with solid designs (compared to the other colors), and something had to go. In the end, it wasn’t a tough choice.

You might want to compare my design decisions with the remarks I made towards specific mechanics in my previous article. Obviously, I couldn’t get rid of everything I considered a mistake – Kamigawa Remastered is still roughly 50/50 about spirits and non-spirits, and I embraced slice onto arcane instead of cutting it – but the most glaring issues should be solved. I was a bit concerned that without the handsize matters theme Saviors of Kamigawa might not contribute much, but while it certainly suffered somewhat, there are still many cards from that expansion in my set.

A file with the complete list of my set is at the end of this entry. 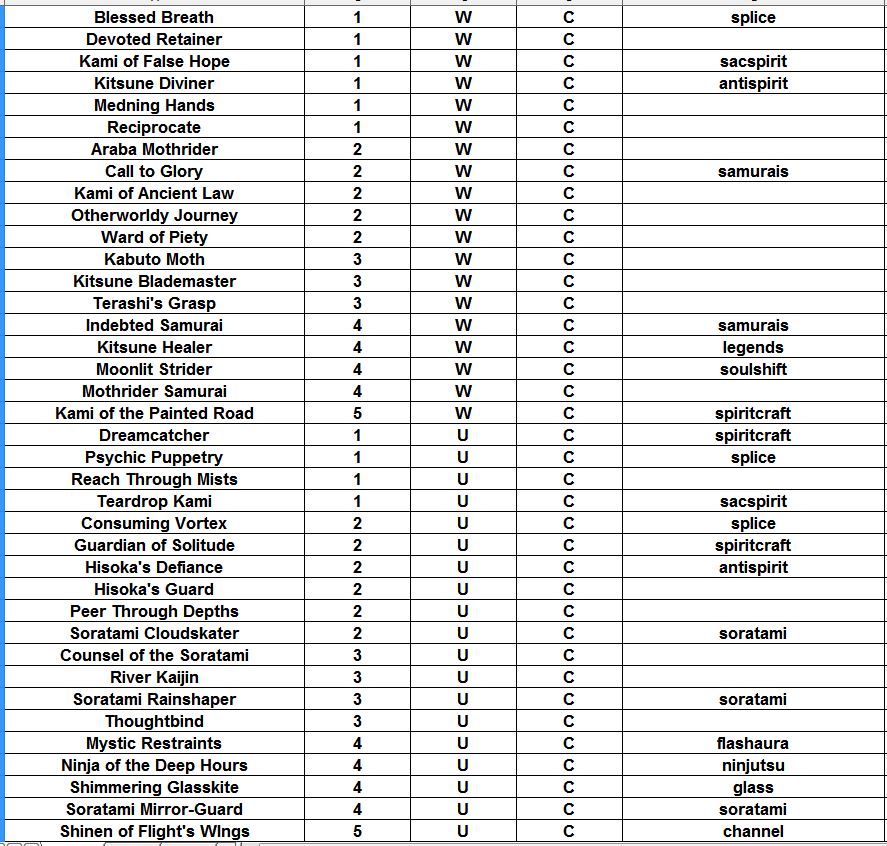 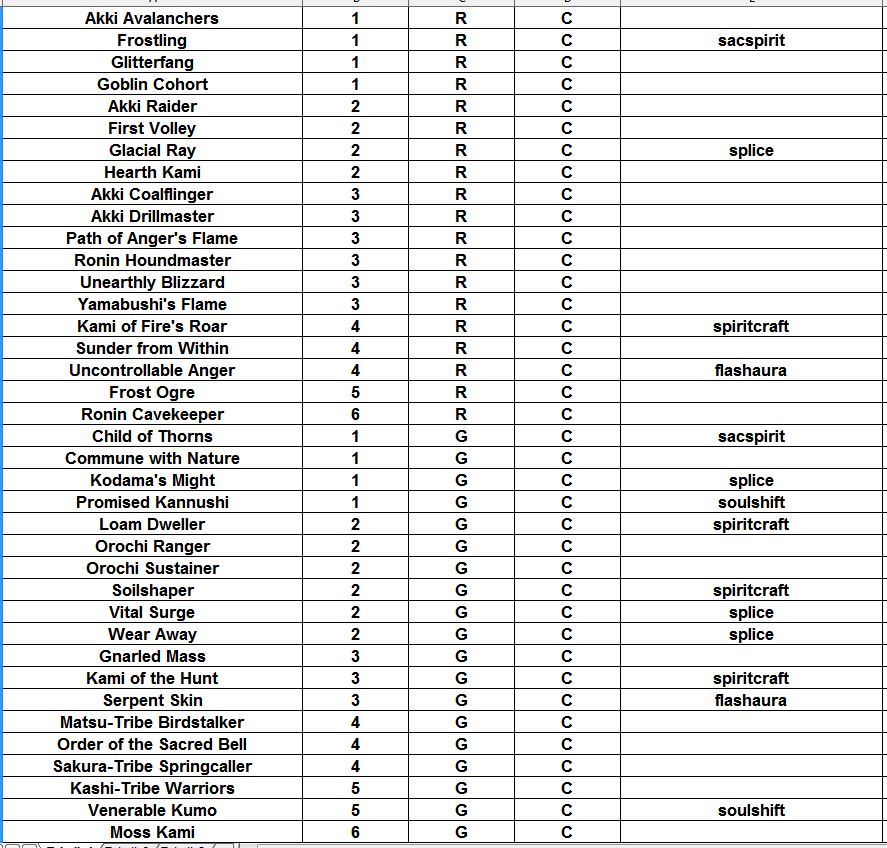 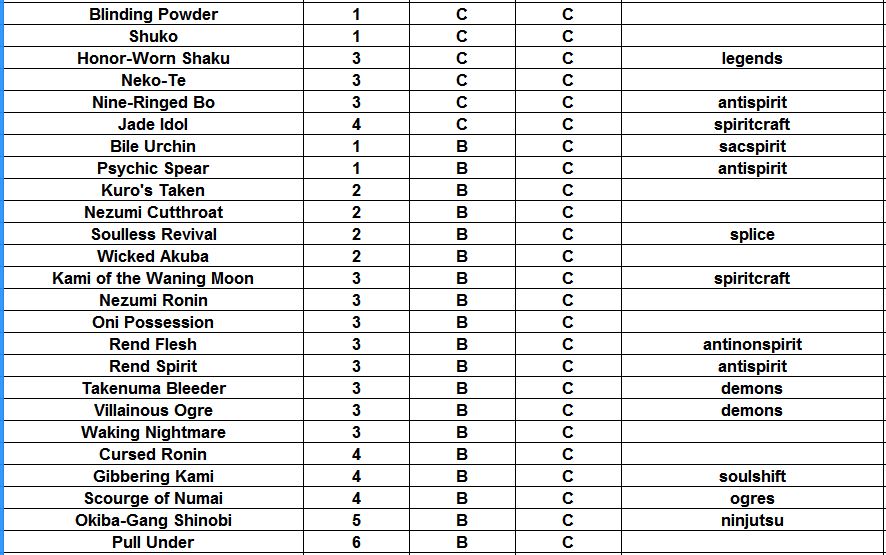 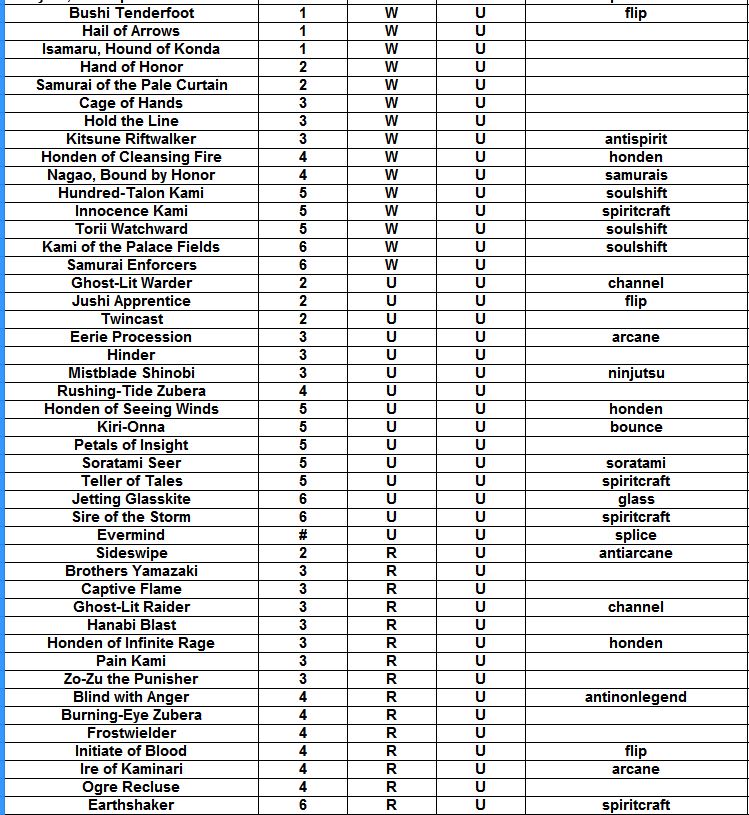 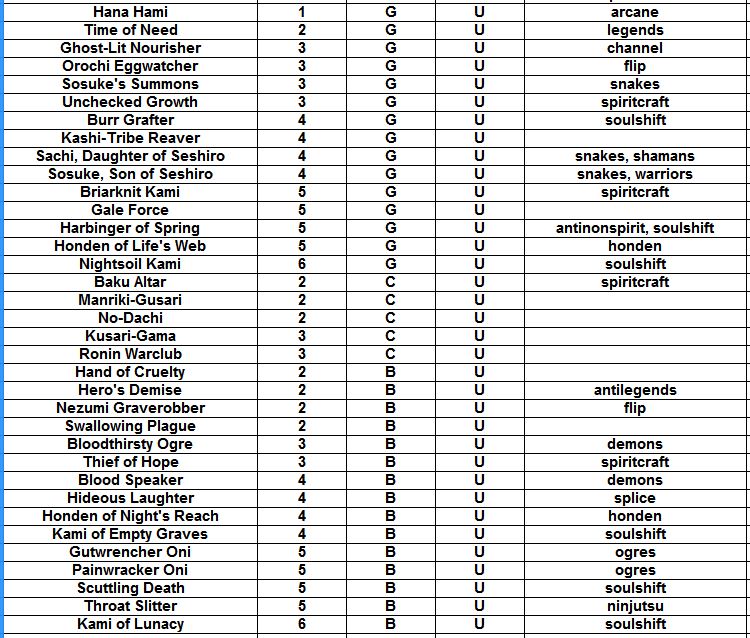 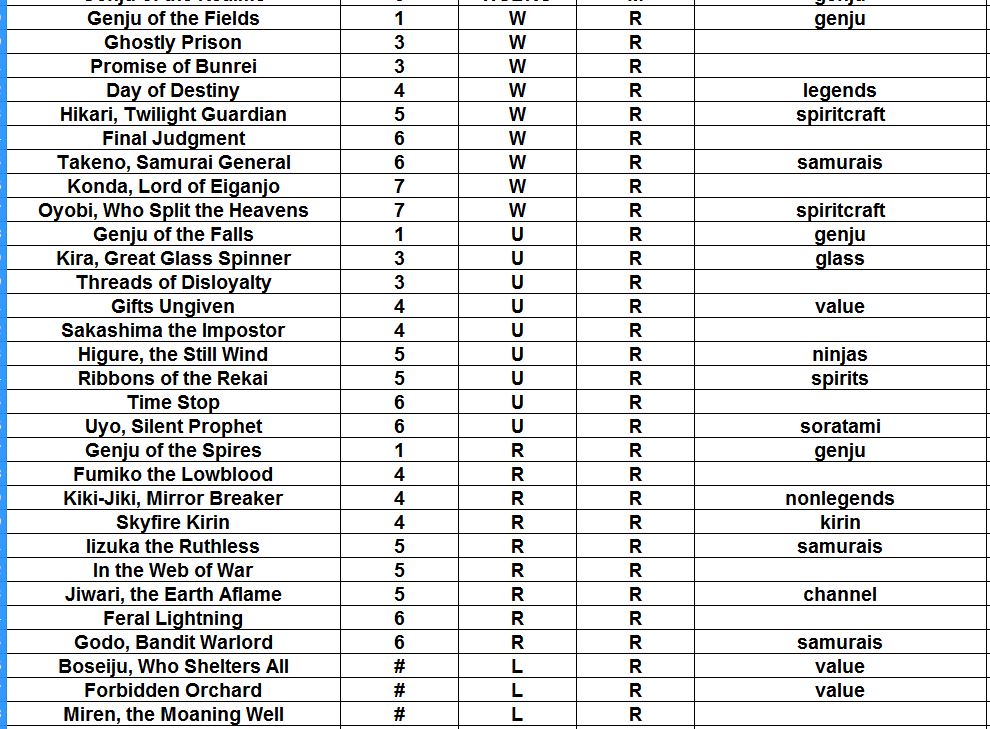 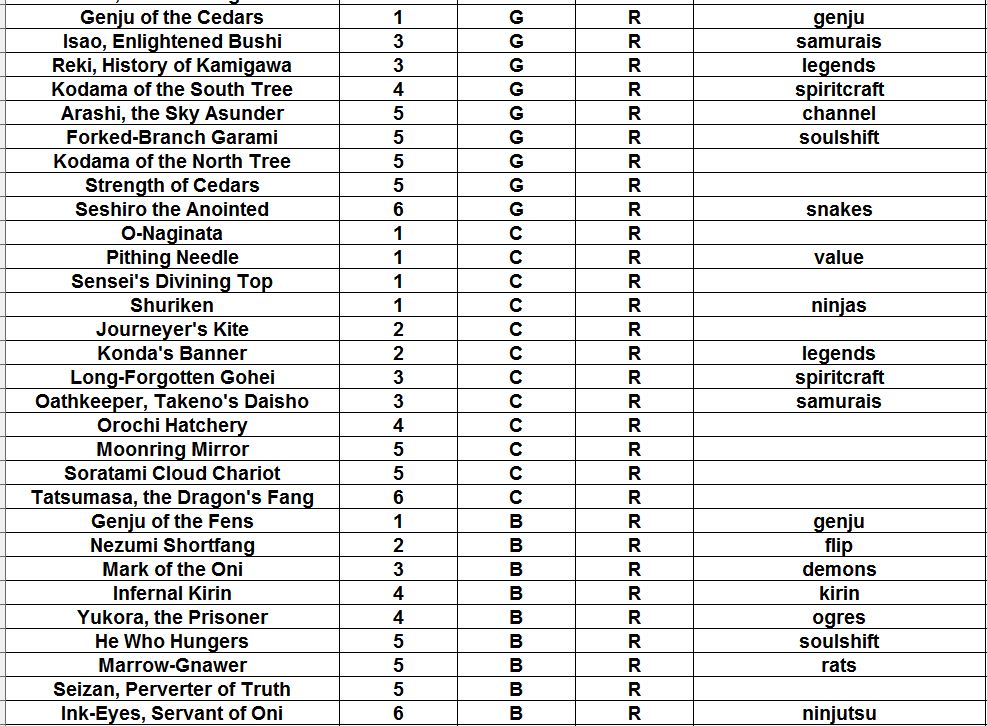