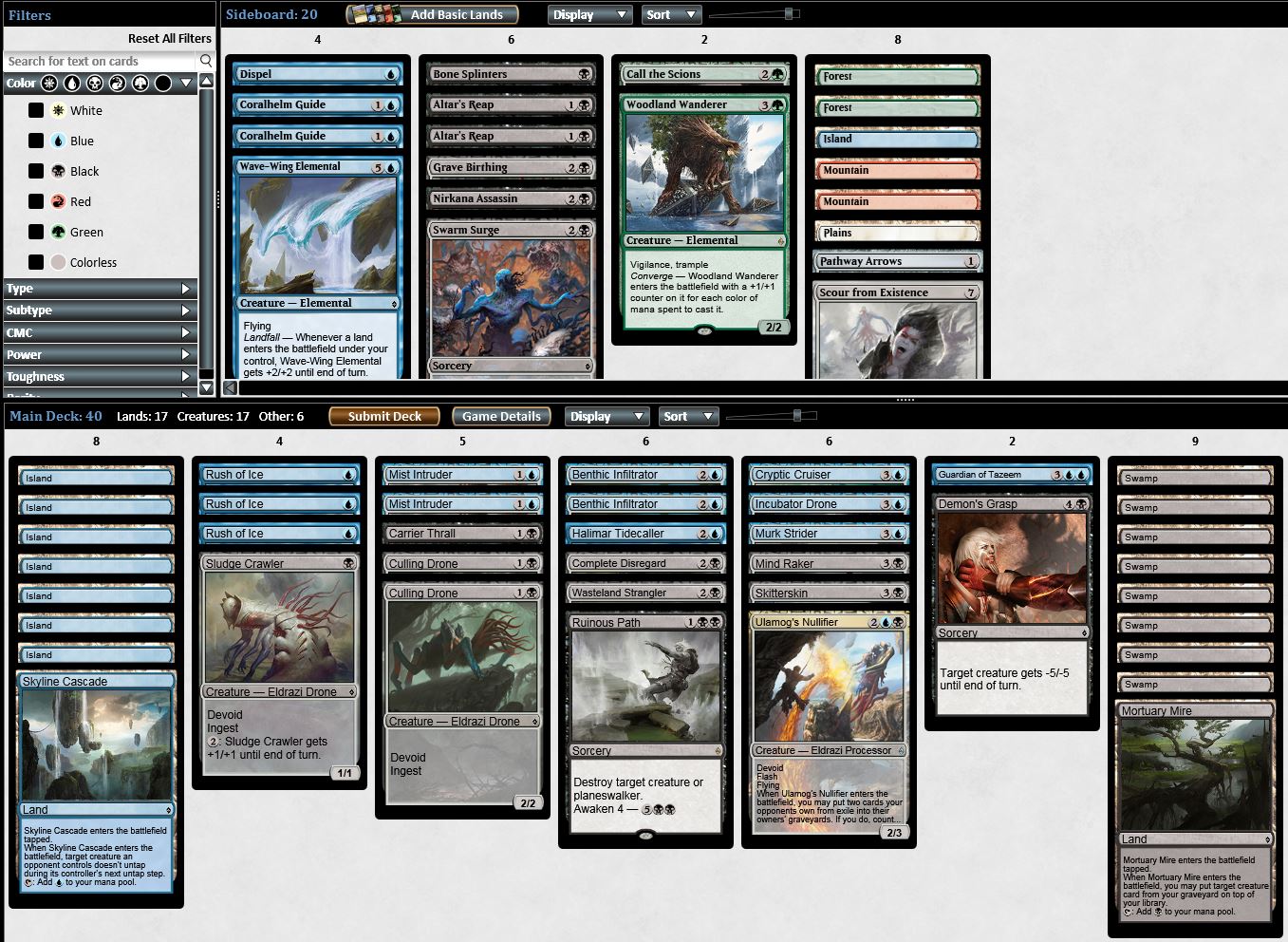 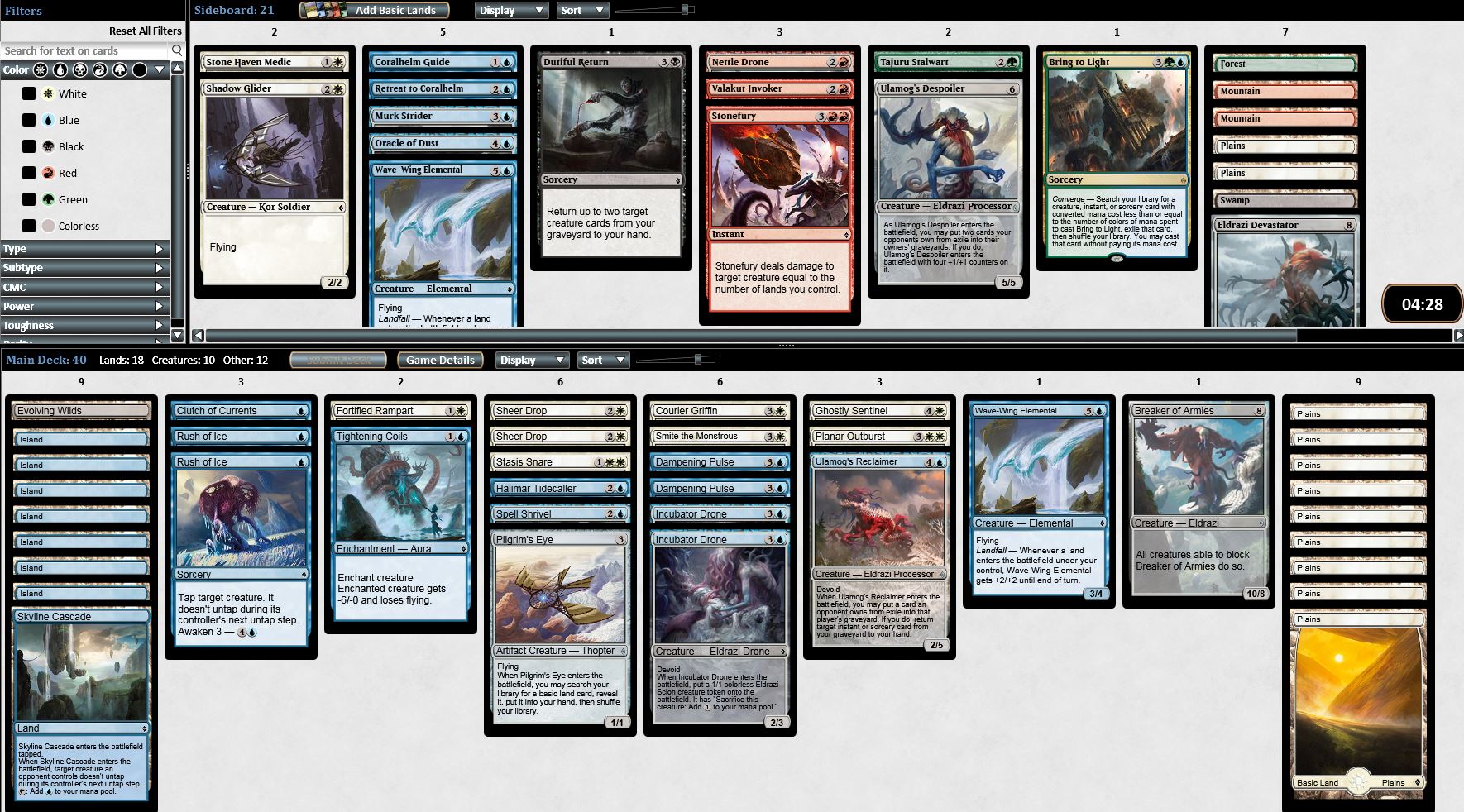 An unbelievable chain of MTGO bugs

I have put this blog here on hold while I’m busy managing the editorial side of the German Magic site Magic Universe, but I really do not want to withhold this absolutely hilarious client behaviour from you! I’ll just copy/paste my mail to WotC customer service here:

this is getting ridiculous. All of the following things happened during one single draft today (note that the draft I had done immediately before went without any hiccups):

1. I was disconnected from MTGO during the third booster round of the draft. I restarted the client as fast as possible, but missed a couple picks around pack 4-6, I believe. I can’t say for sure because of the multiple further issues happening afterwards and confusing me. One thing is for sure, though, that the program had picked a basic land for me while I was disconnected, since I now had three in my possession and only last-picked them before.

2. When I finally got back into the draft, I was teased by a Meandering Towershell in my pack which I wanted to draft, and rushed by the clock showing I only had 2 seconds left to draft. I frantically clicked on the Towershell, but the screen was frozen.

3. Then the screen changed to a later pack, the Towershell was not added to my picks, and I could finally continue to draft.

4. After I took my 41st card, I never got to see my last pick of the third booster, with the screen immediately switching over to deck-building. I’m not sure if I got a card at all – I still had only three basic lands, but I can’t swear I consciously pciked 4 copies of Taigan’s Scheming, for example.

4. After salvaging my draft as well as I could, I then proceeded to deck-building. When I submitted, I got the „unexpected error occured“ message (was that bug not supposed to be fixed?) and had to restart the client again.

5. I got back to my deck-building screen. Obviously, all cards were in my sideboard. I frantically rebuilt my deck. The first card I added was a Treasure Cruise I had drafted during the first booster round, and which had always been part of my pool. After I had added a dozen or so cards to my deck, the screen froze again for a few seconds, and then changed. Most cards I had added to my deck were there, but the Treasure Cruise was gone (and no, it was not in the hidden area, or anywhere else. I quadruple-checked all screen areas in all views!)

6. On the other hand, that Meandering Towershell was suddenly in my card pool, which it hadn’t been a few seconds ago! I had to build the deck without Treasure Cruise, but could use the Towershell at least. Still, there was a reason I ran two Scout the Borders, and the Cruise had been a high pick I took.

7. When I got to sideboard after the first game, Treasure Cruise had miraculously re-appeared in my card pool, but in the sideboard, not the deck (and Towershell was also still there).

8. After losing the first round, I was then disconnected AGAIN from MTGO during the second round. It took me half a dozen tries to get back to my game after 6 minutes or so.

9. A few minutes later, during the same game, I got disconnected AGAIN. Fortunately, this time I could return a lot faster.

10. When later looking at my deck in the freeform binder, the Meandering Towershell was not there. Neither in the deck, nor in the sideboard! Note that I won several games with this creature which MTGO says was not part of my drafted cards!

11. Then again, Treasure Cruise was shown there. As part of my DECK, not my sideboard. It seems the deck saved to my folder was that of my first (failed) submission.

12. Oh, and I had 39 cards which were not basic lands in my pool (meaning I did not get a last-pick basic land during the first-booster round), obviously not couting the Towershell which had meandered out of my card pool.

13. Of course, I now wanted to know if that Meandering Towershell had been added to my collection at all! There had been none on my account before, so I could say with certainty that I had… TWO now?

14. Okay, wrong numbers of card copies in the collection is yet another annoying, but known bug, so I restarted the client AGAIN and found out that I am now correctly in possession of ONE Meandering Towershell.

15. But can you guess what card had NOT been added to my collection? Right, Treasure Cruise was missing! (I know for certain that I already owned a playset before that draft, and I now still had four. Note that I actually DREW Treasure Cruise in a draft game (although I don’t know if this was a game where I had also drawn Meandering Towershell).

While this all is borderline hilarious, I hope you understand how deeply unhappy I am with the performance of the client, especially because I am currently at 13 qualifier points this season and have likely been losing at least one of those points to its repeated buggy behaviour.